Current issues and things in the news

Of course this is in keeping with a trend that goes back at least 45 years. 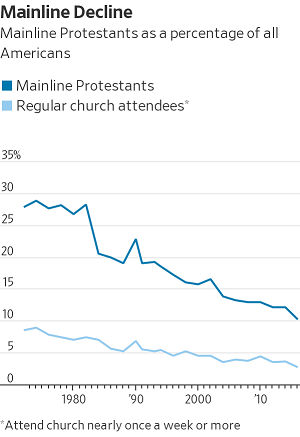 So what's going on here? Is it protestant religions' fault for not keeping up with the changing needs of Americans, or was this an inevitable result of an increasingly better educated population? That is, does religion survive best when surrounded by ignorance? These questions are all the more pertinent because while religion is taking a nose dive in the USA the "nones or undesignated" have been soaring in numbers, showing an 800% gain in the last 60 years.. Re: Protestant Christianity Plummets 23% In Last 14 Years In USA

Miles wrote: ↑Sat Dec 18, 2021 4:15 amSo what's going on here? Is it protestant religions' fault for not keeping up with the changing needs of Americans,

This seems to be the case.

1. People just don't have the time to devote to religion anymore. A symptom of late-stage capitalism is that the nonessential will be wiped away, and people will have to devote more of their time to things that help them succeed. Resume building classes may have indirectly replaced church. Less and less free time equals less and less time for things like religion, and there's a second-order effect of this when people stay religious but don't go to church, so their children are likely to end up even less religious than they are.

2. People leave their regular religions because they don't want to be associated with crazy religions. If I put myself in the shoes of Joe Normal, reading over and over again how some religious person just blew up a building, assaulted a homosexual, or molested a child, that affects me even if it's not my sect doing it. That's saying nothing of the people whose sects are doing it. My choice would probably be to keep believing what I believe, but to do it at home and stop giving evil people money.

3. This is kind of out there but I blame AA. Just my opinion, but people who have never gone to church get introduced to organised spiritualism and God in Alcoholics Anonymous, which is definitely a cult and not a religion, and when it doesn't help them, when they recognise the cultish BS, when they think, oh, this is what religion is... they go full atheist.

4. Reinforcement. (As an enhancer for other effects.) There may have always been a large number of people who don't believe anything, but back when numbers were less in their favour it may have kept them silent. As it becomes more and more normal to be irreligious, those who were always irreligious may become more comfortable with saying so.

5. Education I'm going to say yes and no. It's not as if there aren't ways to harmonise whatever one is taught and religion. It's more about information than education. In the past it wasn't easy to go find prominent atheists or dissatisfied members of your own religion, so maybe you swallowed it and assumed you were the odd one out. But when all you have to do is click on YouTube, and here's this guy with tends of thousands of likes describing exactly what you find wrong with the religion, maybe you don't just take your dissatisfaction and eat it; maybe you find the door if the path before you was worn down smooth and easy by many footprints before you.
Top

Re: Protestant Christianity Plummets 23% In Last 14 Years In USA

Knowledge is the enemy of faith. When people learn more, there's less need for them to believe in something that was once said to be all those things.

What I find interesting is, based on your graph is the % at which protestantism has declined vs other religions. Could this be because there are more protestants over all? Or maybe other groups have done a better (or worse, depending on your POV) on indoctrination, dogma and creating fear and guilt? There seems to be (in my area at least) more protestant churches being 'all accepting' than cathlics and the like. Maybe this is causing more people to leave their faith than in years' past? Or maybe protestants have less 'socially beneficial' activities that others?

Look at all the child molesting issues the catholic church has been dealing with in the past years. One would think if catholics cared about the abuse of children they'd leave. Maybe that's not happening as much as one would think?

It's all weird when you deal with beliefs, which can vary greatly from one person to the next even within the same organization. There's likely more than one cause. At any rate, IMO, the more than leave all christianity the better.
Have a great, potentially godless, day!
Top
Post Reply
3 posts • Page 1 of 1