Who will win the 2020 US Presidential Election?

Two hot topics for the price of one

Who will win the 2020 US Presidential Election? 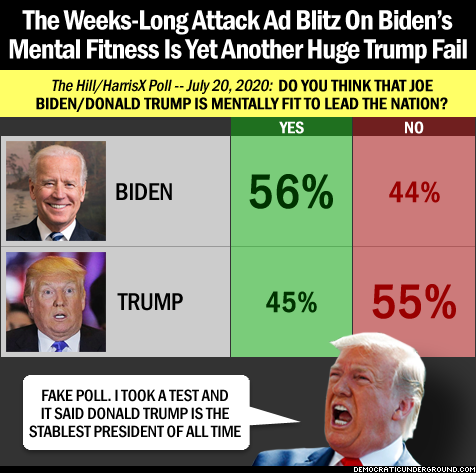 It sure is a lot better than their view on Trump's obvious lack of mental fitness. One thing's for sure, Biden never stood by doing nothing as 140,000 American died like Trump has done while the latter has attempted to justify himself at every opportunity.
Top

AgnosticBoy wrote: ↑Fri Jul 17, 2020 2:35 pm As an independent I can honestly say that I dislike Trump's character but not so much his policies. The media makes the mistake of focusing on his character, but I focus more on his policies and that of Joe biden's. And so far I am not impressed by Joe Biden.

First, what specific Trump policies do you like? I understanding liking a candidate’s policies, I am just curious which ones from Trump you favor.

Second, do you think that we can separate character from policy in a candidate? It seems to me that both policy and character are important.

Third, does it matter? The question was about who would win, not who should win. You may separate policy from character, but (right or wrong) most Americans don’t. Even if Trump has better policies, won’t his poor character still sink him?
Ignorance more frequently begets confidence than does knowledge.
-Charles Darwin
Top

AgnosticBoy wrote:
As an independent I can honestly say that I dislike Trump's character but not so much his policies. The media makes the mistake of focusing on his character ...

I agree with you to some extent on this, especially his FAILED policy towards the corona crisis.

Countries such as Vietnam (population 97 million) and Japan (127 million) have suffered far fewer deaths. This because of resourceful and intelligent leadership. But the USA which claims to have the world's best medical coverage has the highest death rate. This because of the ineptitude and incompetence of the Trump regime. I do not see so much as a word of criticism from Fox or from the rest of the supposedly "liberal" media. If the media were to speak the truth about that incompetence and compare it with the rest of the world, this would do a great deal towards insuring a defeat for Trump and a victory for America in the election to come.
Top

bjs1 wrote: ↑Wed Jul 22, 2020 11:18 am First, what specific Trump policies do you like? I understanding liking a candidate’s policies, I am just curious which ones from Trump you favor.

I like his policy of levelling the playing field on trade with China, Canada, and Mexico. I'm sure he has plans for the European Union since he's making them pay more for NATO. His plans aren't perfect but it's sure better than the last couple of presidents that did nothing about it.

I like most of his policy on security. While the Dems weakness made the protest worse than what it should have been, Trump plan was to add national guard and when that was followed by the Minnesota government, then the protests became less violent and less disastrous to the community. He also added extra security at the border to stop the large caravans that we're coming over from Mexico. Without that thousands upon thousands would have been rushing into our country.

These are just two examples.


bjs1 wrote: ↑Wed Jul 22, 2020 11:18 am Second, do you think that we can separate character from policy in a candidate? It seems to me that both policy and character are important.

We can to a degree. If he acted on his character he would do nothing to benefit minorities, he would install a dictatorship since he said in a press conference, "as president my authority is total".

Trump is certainly no Christian but yet he's doing things that would appease to Christians. If he was acting based on his character then he wouldn't be doing anything for Christians or "conservatives".


bjs1 wrote: ↑Wed Jul 22, 2020 11:18 am Third, does it matter? The question was about who would win, not who should win. You may separate policy from character, but (right or wrong) most Americans don’t. Even if Trump has better policies, won’t his poor character still sink him?

All I see you doing is projecting your own standards onto others. You don't speak for Independents, and certainly not me.

people have been complaining about his character since he first ran for president but yet people voted for him and he won. That's enough evidence for me that people can separate policies from character.
Top

[Replying to koko in post #71]
Actually, the week long ad may've worked if you consider that having only 56% Americans thinking that you're mentally fit is a BAD thing. That means close to half of the country has no confidence in your thinking and judgement. Perhaps Biden's poll numbers would've been higher (upwards towards 80% given his long time experience in government) had it not been for Trump's campaign exposing Biden's cognitive impairment.

Now Trump only appears smart when it comes to the economy since he has some business experience. He's also good with messaging and with the optics of things. But beyond those two areas, I'm sure he's not so bright and he's getting a lot of his cues from Fox News reporters and other prominent Republicans. I've always said he's not a good leader but rather he is a good manager and I say that because others are running a lot of things for him (but of course he gets the credit).
Top


I have repeatedly addressed the alleged Biden issue by saying that is a medical matter to be determined by qualified doctors, not by you or I.


Right, as if Biden would release those details...


I suppose we could consider what the doctor who performed the surgery has to say. This is from an interview he gave to Politico last summer:


Caputo wrote:
The two brain aneurysms Biden suffered in 1988 were fully treated and he showed no signs of mental trouble as a result, said Dr. Neal Kassell, who performed the surgery on Biden three decades ago. Nor did Biden suffer any brain damage that could come back to haunt him in old age, Kassell said.

“He is every bit as sharp as he was 31 years ago. I haven’t seen any change,” Kassell said. “I can tell you with absolute certainty that he had no brain damage, either from the hemorrhage or from the operations that he had. There was no damage whatsoever.”

AgnosticBoy wrote: ↑Thu Jul 23, 2020 11:59 am
Perhaps Biden's poll numbers would've been higher (upwards towards 80% given his long time experience in government) had it not been for Trump's campaign exposing Biden's cognitive impairment.


No need to speculate, as we have those numbers:

A Washington Post-ABC News poll May 31 asked whether each candidate "has the mental sharpness it takes to serve effectively as president."

A Fox News poll July 19 asked whether each candidate "has the intelligence to serve effectively as president."

In other words, the polling hasn't changed much at all, despite this ad campaign.

This does illustrate a problem the Trump campaign faces, though. The avenues of attack they have on Biden are areas where Trump is also weak or even weaker.
Top

Okay, we're now 100 days from the election -- a milestone, of sorts, in all presidential elections.

The polls haven't changed much in the past month since we started this thread. Biden is still ahead by 8-9 points:

According to the Real Clear Politics polling averages, if the election were held today, the result would look like this:

Nevertheless, most of the people participating here (7-4) think Trump is likely to win.
Top


It is clear that Trump's campaign in which he tried to project Biden as suffering from dementia failed.

However, the polls data is not accurate as it only shows potential voters, not the amount of votes that will be counted. This because southern states and others suppress many votes by having few voting booths in the ghettos, displacing voting facilities, or unfairly disqualifying black and other minority voters. Thus, the polls do not show how many votes will be counted.

Because of the cheating, it is likely that Trump will "win" again.
Top

AgnosticBoy wrote: ↑Fri Jul 17, 2020 7:57 pm
It shows the folly of thinking that someone will win based on current polling. Polls can and do change. I'd even argue that a prediction or campaigning should not be based solely on polls because polls are not always right.


This point is certainly well taken. Polls are not predictions, they can and do change, and they are subject to error. That is particularly true at this stage in the election. By Labor Day, the polling average tends to more accurately reflect the final result.

But what are the alternatives?

The posts in this thread that make a prediction using something other than polls appear to rely heavily on subjective assessments of the candidates or speculation about what each candidate will do. These are not particularly rigorous, and seem prone to confirmation bias.

We might look instead at some of the models out there that take into account 'fundamentals' -- i.e., structural factors such as the state of the economy -- to predict the election. There is certainly something to these, as there are some swing voters who appear to vote for the guy in charge when things are going well or the challenger when things are not going well. Trump was doing well in these until the events of this year sent his fortunes south.

Presidential approval is another option, but again, Trump's fortunes here are not good, as his approval is quite low.
Top
Post Reply
93 posts

Return to “Politics and Religion”