Evil is Banal (Until It Kills You)

Evil is Banal (Until It Kills You)

There's a certain school of thought that says evil is banal (Hannah Arendt pointed this out especially, I think). Whereas many of us look upon evil as something fantastic and powerful, really it is boring, weak, pitiful, etc - in a word, "human" and not something particularly special or even interesting. Thinking this over, I agree that evil is indeed banal, but it is not impotent. And, given the atheistic worldview, it can be made into something Absolute, Unique, and Unsurpassable.

Take a murderer. If a murderer takes your life, and there is no life after death, nothing at all, then what he has done to you is eternal. It is something which is and will remain a permanent Fixture of reality forever and ever. The murderer, in some respect or other, has won a permanent Victory over you, and especially if there is no retaliation for him in this life or the next. So in that sense, evil wins. And that is powerful and unique. It may be boring, but it is a "win" on the side of the evil-doer, something he or she can cherish in their heart of hearts until the end when they too, presumably, go to sleep.

You are dead. Perhaps you are also raped or molested. You are destroyed, abused and so on. Of course, this is run of the mill stuff. Even the most heinous deeds are commonplace, being distributed throughout human society. But there is a certain sense in which their stench is everlastingly present and all-pervading, should atheism prove true. This mobbish stench, which is the criminal's perfume, may be exalted and gloated over by the miscreant, for all it's coarse tastelessness - perhaps all the more for that.

Hence, whenever I hear atheistic literati mock crude evil-doers as weak pathetic losers, I cannot help but rue over how misguided they themselves are. They do not know that, given their merely terrestrial views of justice, the ones they scorn are, potentially at least, in a much superior position to them in many ways.
Top

Re: Evil is Banal (Until It Kills You)


There's a certain school of thought that says evil is banal

While evil is relative in many cases, I'm not sure it's 'boring' - at least not to everyone. I see people do (what I consider) evil things almost daily. And while most wouldn't consider what they do as exciting, many do.

whenever I hear atheistic literati mock crude evil-doers as weak pathetic losers, I cannot help but rue over how misguided they themselves are.

Interesting idea. Seems to me it's easier many times to do things that are considered 'evil' over things that aren't considered 'evil'.
It's easier to pull a trigger and kill someone than it is to face the temptation, plan it out, then stop at the last minute. Of course there are all sorts of examples we could use to prove a point one way or the other I suppose.
I'm just not sure it (evil doers are or aren't weak) is such an easy statement to make with such broad brush.

They do not know that, given their merely terrestrial views of justice, the ones they scorn are, potentially at least, in a much superior position to them in many ways.

In some ways sure. But in other ways, maybe not.
Have a great, potentially godless, day!
Top

Re: Evil is Banal (Until It Kills You)

This topic made me think of Jerry Smith, and people thinking Jerry Smith is the epitome of evil.

If you don't know the reference, this is the biggest loser in the world. He only ever gets anything because somebody takes pity on him. He thus has a tendency to be compliant. This is a picture of Jerry Smith being decorated by a tyrannical empire: 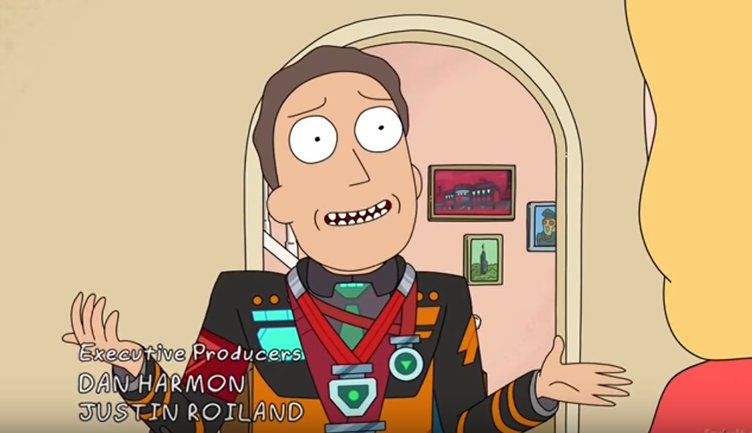 When tyranny moves in, Jerry moves up. It's natural because he doesn't buck authority.

So, the idea goes, people advancing or complying with evil are the ones actually at fault. Without them, you see, evil couldn't prosper. This galactic empire, for example, one could hardly picture being full of Hitlers. There just aren't that many Hitlers; there are, however a lot of people who comply out of fear or laziness or (sometimes) desire to succeed*. Asterisk for the last, but read on.

But the thing to remember is that a world full of Jerrys isn't evil at all. In fact, a world full of Jerrys is less evil than the world we have because Jerrys fear and avoid conflict due to their so-called "loser" nature. They are risk-avoiders, and due to that trait, they get blamed when evil succeeds because they didn't fight that evil. This is very, very different than actually being evil.

A world populated entirely by the very evil people at the top would be horrible. And evil. Everyone would be at each other's throats, struggling to clamber over each other for the slightest advantage.

A world full of crusader-level good people might not be much better because people disagree on what is good. And like the evil people, the good people are not risk-adverse. They see evil and they fight it. They do what is right. Can you see the problem here? You might have just as much pointless conflict and ruin in this world as in the evil one.

Thus it is very clear that the Jerrys are not the essence or even the cause of evil. When they people the world, it gets better, not worse. They don't screw each other over not necessarily because they think it's wrong but because they're afraid of the possible consequences. It's easy to seize on them and blame them, but the world actually needs them as a buffer. Without them everyone just fights constantly because no one compromises. They keep the world sane. And to the crusaders, I would say, the world needs them, but not so much you.

There is an exception however and that's the opportunistic predator disguised as prey; this fellow waits and avoids risk until he can exploit others and grab power, and then he does. This is how the main character of this show sees Jerry, but I disagree. Jerry is not striving for relative success; he's simply trying to stay alive. He will take a promotion if you give it to him but fundamentally he's too afraid to ever seize a large amount of power, even if he did want it and even if he did have the opportunity. He's not even a mooch; he will go to work if you give him a job and actually care about doing his job well, I will say, a great deal more than average.

I don't think evil is banal; I don't think it's possible to be evil without 1) drastic and decisive action, 2) an unhealthy level of comfort around risk, and 3) a total insensitivity to the suffering of others.

If you don't care about people, but you're not doing anything to hurt anyone, you're not evil.

If bad stuff is going on, but you're not the impetus, you're not evil.

It's easy to make that mistake in a world where the people who run things are out of view and the millions of compliant cowards aren't, but it is a mistake. Evil is not something you see every day. Evil is not someone just trying to stay alive. Evil is not making ends meet. If it was, all animals would be evil. If it was, the word would have no meaning because it would be so normal. We use evil to describe the outliers and to me that's quite correct. There is something about the murderer, the rapist, or the genocidal maniac that separates him from the great vast majority and there is no better use of the word evil.
Top
Post Reply
3 posts • Page 1 of 1