First off, let me preface this by saying the following..

1. As mentioned on another thread, I have many years invested in dealing with Jehovah's Witnesses (JW's), from family, to friends, to strangers. I am very familiar with them and their theology.

2. I am beginning a series of threads attacking their "Christian" theology and doctrine. This one, as titled, deals with Jehovah's Witnesses and their false prophecies.

3. I have beef with, not only JW's, but ANYONE of whom I believe to be spreading false Christian doctrine. This includes, but not limited to...

So, the question is ultimately; Why do I feel as if Jehovah's Witnesses are false teachers? There are many reasons, and one of those reasons is their many failed attempts at predicting prophecy.

Before I continue on post #2, keep in mind that future threads in this series will go straight to the gusto, with no preface.


tam wrote: Using Daniel 4 to support the end of 'the times of the gentiles' is also a big mishmash of interpretation.

The expression Jesus used "the times of the Gentiles" is his own; it is not found in Daniel, or anywhere else in the Bible.

Jesus also says nothing about a 2520 year period, or about Babylon.

They will fall by the sword and will be taken as prisoners to all the nations. Jerusalem will be trampled on/trodden down by the Gentiles until the times of the Gentiles are fulfilled.

His "times of the Gentiles" prophecy of Jesus began with the fall of Jerusalem in 70 A.D.(by Rome, not by Babylon).

It ended, it seems, in 1967 when Jerusalem finally became free of Gentile control.

Checkpoint wrote: ↑Mon Aug 02, 2021 12:22 am The expression Jesus used "the times of the Gentiles" is his own; it is not found in Daniel, or anywhere else in the Bible.


IS IT BIBLICALLY SOUND TO TIE JESUS END TIME REFERENCES WITH THOSE IN THE BOOK OF DANIEL?


Yes, at least twice in his prophecy concerning the time of the end, Jesus referred to the contents of the book of the prophet Daniel; at Matthew 24 verse 15 where he (Jesus) speaks of "the disgusting thing that causes desolation" of Daniel 11:31 and his reference to"the great tribulation" (compare Daniel 12 :1). The context and content of Jesus words at Matthew 24 and 25 indicate there is indeed a link between what he was saying and the words of the Prophet Danel


"LET THE READER USE DISCERENMENT"


But, some object, Jesus also says nothing about a 2520 year period, or about Babylon. True, but Jesus in giving his end time prophecies makes an interesting note, he says : "Let the reader use discernement". The Greek word translated in the NWT as "discernment" is anaginosko from the greek "ana" which, according to Strongs as a prefix can mean "repetition, intensity, reversal" and "ginosko" which means to "know" (absolutely) ... to perceive, to be sure, to understand". So Jesus is encouraging the readers to seek the understanding or the true meaning of what they are reading. If true understanding came to anyone that was merely literate, Jesus' words would be redundant, Jesus was saying more than understand the words, he was urging readers to see what was not clearly evident.

Interestingly we can also note, at the time Jesus words were not written down, he was thus evidently encouraging the readers of existing Hebrew scripture to understand the significance of what they had read (in prophecies long ago recorded) as said passages relate to what he was teaching.

Those that say, I can't see that number, he didnt say that word, are clearly missing the point of Jesus prophecy and prophecy in general: critical thinking skills must be applied to link what is being said to existing scripture. It is evident Jesus was speaking of Jerusalem, the Kingdom promises, his upcoming judgement and that all these events had something to do with Daniels ancient prophecies.

Today, for many, all this is either irrelevant ("I don't know what the prophcies mean and I do not care to know") , a confusing mystery ("....we don't have a clear understanding of the passage in question") or a "big mishmash" (MISHMASH implying: one should not attempt to link Jesus words with earlier prophecy, despite the fact that he himself did exactly that). Serious bible students however have long understood Daniels prophecies run from his day all the way down to the last days, the coming of the promised Messiah and beyond. That many simply don't undestand this is to be expected, afterall the angel's closing words to the prophet Daniel speaking of those alive during the "end times" were as follows ...

After reviewing many pages of your claims and observing many unanswered questions from others, I find this amusing to say the least. For example:

18 And Jesus came and said to them, All authority in heaven and on earth has been given to me.
19 Go therefore and make disciples from all nations, baptizing them in the name of the Father and of the Son and of the Holy Spirit,
20 teaching them to observe all that I have commanded you. And behold, I am with you always, to the end of the age.

18 And Jesus came and said to them, all authority in heaven and on earth has been given to me.

How do you deal with this dilemma?

I did not observe a clear and definitive answer from you regarding this question posed by Checkpoint.

You also claim that God established his governing “kingdom” in 1914.

Is this kingdom ruled by the “Lord of lords and King of kings”?

You indicate the there are also 144,000 co-rulers or administrators assisting in the administration of his kingdom.

Who are these administrators?

When were they chosen or appointed and by whom?

Do you have their names?

How were they chosen?

Who had the authority to choose them?

I think you indicated that these 144,000 have been chosen during this period of well over 100 years?

I might point out that in Amos 3:7 it is clearly stated that God will do nothing , but what he will reveal unto his secrets unto servants the prophets.

Who are the prophets that he revealed this major event of establishing this kingdom in 1914?

What are their names?

I look forward to hearing your answers to ALL of my questions.

[Replying to Revelations won in post #194]
Your premise is quite frankly absurd that Jehovah has no authority at all because He gave Jesus "all authority." You ASSUME that Jehovah retained no authority. On the other hand, I assume that Jehovah kept for himself the highest authority, as was the reality of the situation since before the beginning of any of His creation. He simply gave Jesus the authority that a King would have over his Kingdom. Wouldn't the king have to still answer to a higher authority even though he had all authority over his particular kingdom?

Jesus was given all authority for his reign over the earth, which kingdom he would hand back to Jehovah after the Millennial Reign. Read I Corinthians 15:24-28.

"Next, the end, when he hands over the kingdom to his God and Father, when he has brought to nothing all government and all authority and power. For he must rule as king until God has put all enemies under his feet....When all things will have been subjected to him, then the Son himself will also subject himself to the One who subjected all things to him, that God may be all things to everyone."

It's pretty clear that Jesus will always be in subjection to Jehovah, his God and Father.
Top

God has granted his Son Jesus the authority to choose those he wishes to rule with.

Why do most Jehovah's Witnesses not eat the bread or drink the wine at their memorial commemoration?
viewtopic.php?p=961920#p961920

and I appoint unto you a kingdom, even as my Father appointed unto me,


One of those initially selected as potential co-rulers deflected but on the last night of his earthly life, Jesus made a formal offer of rulership to the eleven remaining faithful Apostles. We believe he continued to choose individuals to rule with him as more people became Christians indeed, it seems all the members of the first century congregation, which eventually numbered in the thousands, were chosen to rule with Jesus in heaven after they died. It seems he has contunued to select people down throughout the centuries, to the 20th century when he began ruling (see 1 Thess 4:17) and even to our present 21st century.

CONCLUSION : The bible indicates Jesus has been choosing his co-rulers over a period of nearly 2,000 years.

Why do most Jehovah's Witnesses not eat the bread or drink the wine at their memorial commemoration?
viewtopic.php?p=961920#p961920


. It seems he has contunued to select people down throughout the centuries, to the 20th century when he began ruling (see 1 Thess 4:17) and even to our present 21st century.

The verse you referred to has not yet happened.

It is about the resurrection of all believers at his coming, to meet the Lord and be with him forever.

This verse(and its context) says nothing about any 144,000, about him beginning ruling, or about ruling with him.
Top

[Replying to Checkpoint in post #198]
Unfortunately you won't take any explanation for those things. A few of us here have explained ad nauseum how we can scripturally arrive at our explanations, and JehovahsWitness has supplied many links to sound scriptural information, but sound reasoning doesn't seem to be alive and well with some folks here. Do you actually read the info on those links? Our position is fully backed up, yet the same old comments keep coming, over and over. Well....you can lead a horse to water.....
Top 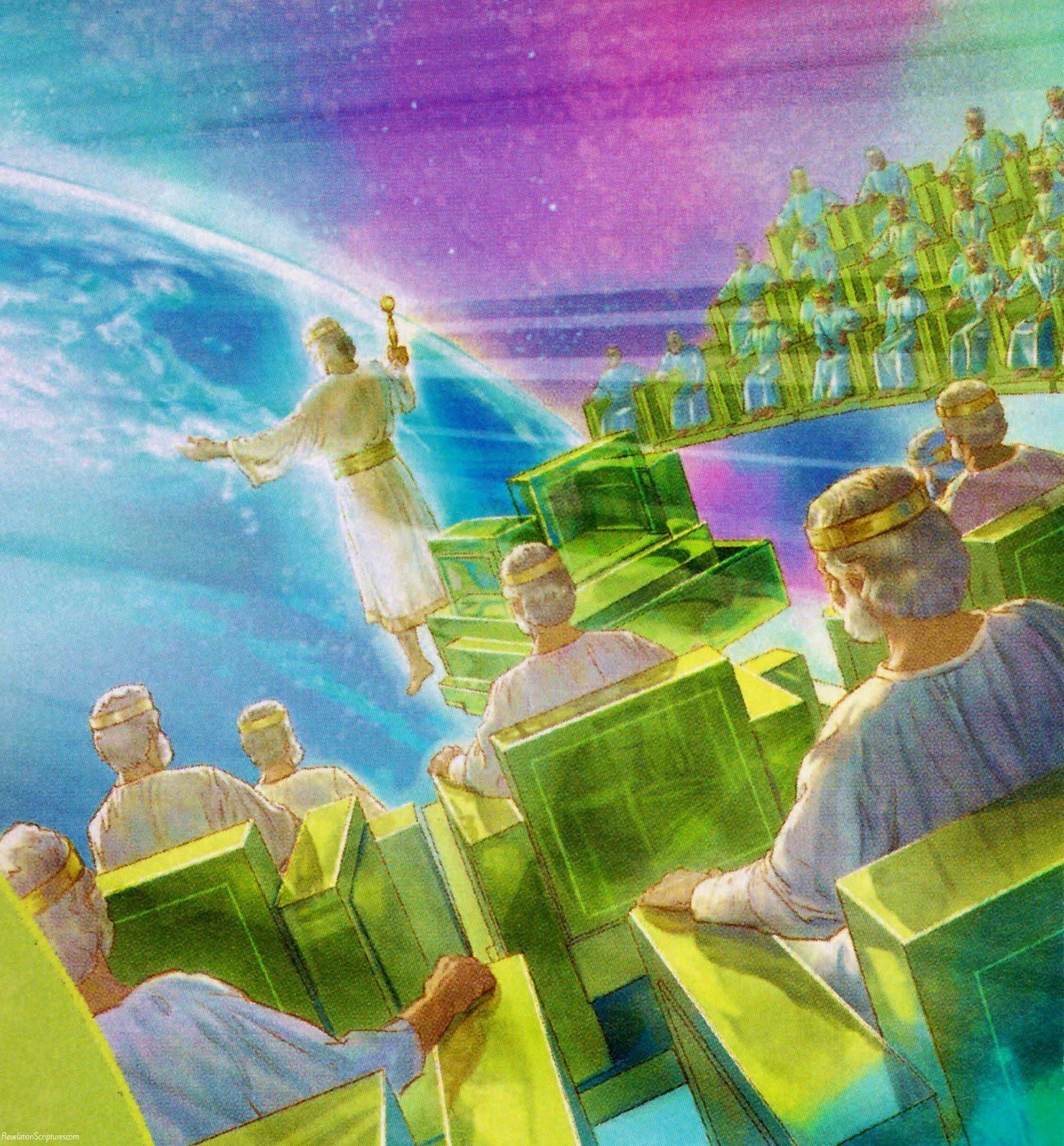 By means of holy spirit.

... received the Spirit of sonship, by whom we cry, “Abba! Father!” The Spirit Himself testifies with our spirit that we are God’s children. And if we are children, then we are heirs: heirs of God and co-heirs with Christ

To learn more please go to other posts related to...


Unfortunately you won't take any explanation for those things. A few of us here have explained ad nauseum how we can scripturally arrive at our explanations, and JehovahsWitness has supplied many links to sound scriptural information, but sound reasoning doesn't seem to be alive and well with some folks here. Do you actually read the info on those links? Our position is fully backed up, yet the same old comments keep coming, over and over. Well....you can lead a horse to water.....

It depends on the quality and source of the water, onewithhim.

Those explanations satisfy JWs, but not others. And vice versa.

You have chosen not to answer any of the specific points I raised.