The Reality Of Hell

The Reality Of Hell

The old English word hell means to cover or conceal. Similar words coming from the same root have a similar meaning. Hill for example is a mound of dirt or stone that covers the level surface of earth. Hull is the covering of a nut or the covered part of a ship. Heal is the covering of a wound. Hall is a building space which is used to cover people or goods. Hole is an uncovering. Shell.

In the early days to hell potatoes meant to cover them, as to store them in a cellar or underground. To hel (one l) a house meant to cover a portion of it with tile.

At first the use of hell had no pagan meaning to it. It was simply used as the common grave of man. To go to hell in the Old English language meant simply that one was dead and buried. It was in Germany and England that the word began to evolve into the pagan unscriptural meaning of eternal punishment.

The Catholic Douay Version translates sheohl as hell 64 times and once as death. The King James Version translates sheohl 31 times as hell, 31 times as grave and 3 times as pit. This is common in older translations like the English Revised Version (1885) where sheohl is transliterated in many cases but most of the occurrences were translated as grave, or pit. Hell being used 14 times. The American Standard Version (1901) transliterated sheohl in all 65 occurrences and haides in all ten of its occurrences, though the Greek word Geenna (English Gehenna) is translated hell.

The Hebrew word sheol is the unseen resting place of the dead. It is not to be mistaken for the Hebrew words for individual burial place (qever - Judges 16:31), grave (qevurah - Genesis 35:20), or individual tomb (gadhish - Job 21:32) but rather the common grave of all mankind whatever the form of burial might be.

The Greek philosophical teaching of the immortality of the human soul and hell began to infiltrate Jewish teachings probably around the time of Alexander The Great's conquest in 332 BCE. The Bible itself, however, is in stark contrast to the teachings of pagan origin regarding the soul, which is not immortal (Ezekiel 18:4; Matthew 10:28) and therefore can't suffer forever in hell. The Bible also teaches that there is no consciousness in hell (the grave). (Ecclesiastes 9:4-10) and that sin equals death, therefor upon death we are acquitted of sin (Romans 6:7).

Sheol corresponds with the Greek Haides, both being the unseen resting place of the dead. It is not a place of fire, but of darkness (Job 10:21) a place of silence (Psalm 115:17) rather than a place filled with tortured screams.

The Greek word Hades corresponds to the Hebrew Sheol as is indicated by the apostle Peter's reference to Psalms 16:10 at Acts 2:27-31 where Jesus had fulfilled David's prophecy that Jesus would not be left in hell. Peter quoted Psalms and used the Greek hades in place of sheol. Likewise Jesus himself said that like Jonah, he would spend three days in hell. (Jonah 1:17; Jonah 2:2; Matthew 12:40)

It means the unseen place. In ten of the occurrences of hades it is in reference to death. It is not to be confused with the Greek word for grave (taphos), tomb (mnema) or memorial tomb (mnemeion), but is rather the common resting place of the dead. The place of death.

Jesus also uses hades at Matthew 11:23 and Luke 10:15 in a figurative way to indicate the debasement of Capernaum compared to heaven.

Also see The Rich Man And Lazarus below.

Unlike the Hebrew sheol and the Greek hades, there is really no excuse for mistaking the Greek Geenna (Hebrew Geh Hinnom - English Transliteration Gehenna) with the notion of any hell, either the Old English word meaning covered or the pagan hell of today's Christianity.

The Christian Greek Gehenna is a literal place - a valley that lies South and South-West of ancient Jerusalem. It is the modern day Wadi er-Rababi (Ge Ben Hinnom), a deep, narrow valley. Today it is a peaceful and pleasant valley, unlike the surrounding dry and rocky terrain, and most certainly unlike the pagan / apostate Christian hell. 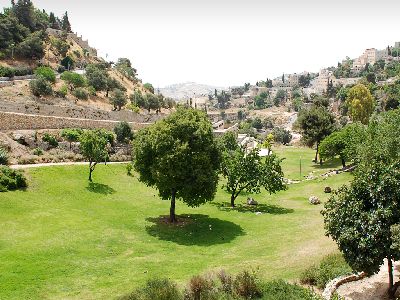 In the days of unfaithful Kings Manasseh and Ahaz idolatrous worship of the pagan god Baal was conducted in the place which was then known as Geh Hinnom, (the valley of Hinnom) including human sacrifices to fire. It is ironic that the pagan custom of burning in fire, as in hell, would have so clearly infiltrated the Christian teachings, considering that this practice was a detestable thing to Jehovah God, and his prophets spoke of a time when this place would be turned into a defiled and desolate place. (2 Chronicles 28:1-3; 33:1-6; Jeremiah 7:31-32; 32:35).

The prophecy was fulfilled in the days of faithful King Josiah, who had the place, especially the area known as Topeth polluted into a refuse heap. (2 Kings 23:10)

So it was that in the days of Jesus and the early Christian congregations, that the valley was known as a literal place where the carcasses of criminals and animals were thrown, having no hope for resurrection. The refuse there was kept burning with sulphur, which is abundant in the area. When Jesus used Gehenna as a symbolic reference to the spiritually dead - the people in the area knew what he was talking about.

The Greek word Tartarus is found only once in scripture, at 2 Peter 2:4. It is often mistranslated as hell. Tartarus in the Christian Greek scriptures refers to a condition of debasement, unlike the pre-Christian pagan Tartarus (as in Homer's Iliad) which is a mythological prison. The word basically means the lowest place.

Peter refers to the angels who in the time of Noah forsook their original positions and became men in order to have relations with the women of earth. The result was their offspring being giants, the Nephilim, who caused so much destruction God had to bring forth the flood. (Genesis 6:1-4; Ephesians 6:10-12; Jude 1:6).

It is interesting that this verse is often mistranslated because when Jesus was resurrected from Sheol / Hades (Hell in some translations) on earth, he first went to tartarus to minister to the disobedient angels whom had been lowered in position - who happened to be in heaven in a position of debasement. This means that if you don't understand the mistranslation you would see Jesus go to hell on earth and then hell in heaven.

The Pagan teaching of hell was adopted by the apostate Christian church. Today's thinking of hell comes more from Dante's Divine Comedy and Milton's Paradise Lost, but the teaching of hellfire is much older than the English word hell or Dante and Milton. It comes from Babylonian and Assyrian beliefs of a nether world. A place where gods and demons of great strength and fierceness presided over the damned.

Ancient Egyptian beliefs considered the Other World to be a place of pits of fire for the damned though they didn't think this lasted forever. Islamic teaching considers hell as a place of everlasting punishment. Hindus and Buddhists think of hell as a place of spiritual cleansing and final restoration.

Modern day Christians often try to soften the teaching of hell as a separation from God, but hell (as is often translated from the Hebrew Sheol and Greek Hades) can't be a separation from God, since God is in effect there - it is in front of him. He watches sheol for the time when the dead shall be resurrected. (Proverbs 15:11; Psalms 139:7-8; Amos 9:1-2).

Jesus often taught people in a way which was easy for them to grasp. One way of doing this is through parables, or illustration. They are stories, which are not meant to be taken as literal accounts. Such is the case with the story of Lazarus and the Rich Man. Notice that the Rich man is buried in hades. If this account is to be taken literally then the Bible would contradict itself with all of the information being given in this article, but lets not leave it up to what may be thought to be my own personal interpretation.

Let it also be known that if this account is to be taken literally then that would make Jesus a liar. How so? How could Lazarus be at the bosom of Abraham in heaven when Jesus had already said that no man had ascended to heaven other than himself? (John 3:13).

The Lake Of Fire

Secular And Religious References To Hell

"Sheol was located somewhere 'under' the earth . . . . The state of the dead was one of neither pain nor pleasure. Neither reward for the righteous nor punishment for the wicked was associated with Sheol. The good and bad alike, tyrants and saints, kings and orphans, Israelites and gentiles - all slept together without awareness of one another." - Encyclpaedia Britannica (1971, Vol. 11, p. 276)

"First it (Hell) stands for the Hebrew Sheohl of the Old Testament and the Greek Hades of the Septuagint and New Testament . Since Sheohl in Old Testament times referred simply to the abode of the dead and suggested no moral distinctions, the word 'hell,' as understood today, is not a happy translation." - Collier's Encyclopedia (1986, Vol. 12, p. 28)

"Much Confusion and misunderstanding has been caused through the early translators of the Bible persistently rendering the Hebrew Sheohl and the Greek Hades and Gehenna by the word hell. The simple transliteration of these words by the translators of the revised editions of the Bible has not sufficed to appreciably clear up this confusion and misconception." - The Encyclopedia Americana (1956, Vol. XIV, p. 81)

"The word ( sheol ) occurs often in the Psalms and in the book of Job to refer to the place to which all dead people go. It is represented as a dark place, in which there is no activity worthy of the name. There are no moral distinction there, so 'hell' ( KJV ) is not a suitable translation, since that suggests a contrast with 'heaven' as the dwelling-place of the righteous after death. In a sense, 'the grave' in a generic sense is a near equivalent, except that Sheol is more a mass grave in which all the dead dwell together . . . . The use of this particular imagery may have been considered suitable here [ in Jonah 2:2 ] in view of Jonah's imprisonment in the interior of the fish." - A Translators Handbook on the Book of Jonah, Brynmor F. Price and Eugene A. Nida, 1978, p 37
I no longer post here
Top
Post Reply
1 post • Page 1 of 1