This story is taking place in another Universe connected with the Human Universe ("The Physical Universe") and is situated in an Area known as The Encampment, central to that being The Campfire.
The area is also referred to as "The Hub Of Hologram Dimensions" and the Universe moves out from that central position in every direction, without end.
The main geographical features of the area include:

The Crystal Clear Waters - a river which flows through
The Crystal Canyon, which causes a natural separation between The Encampment and
The Twelve Judges Mountain Range which also provides a natural barrier between The Encampment and
The Realm of Judgement which is seen from The Encampment as a glowing back-light which silhouettes The Twelve Judges
The Bridge of Forgiveness traverses the Crystal Canyon and any travelers doing so will eventually find their way up
Hub Mound - a large foot-hill, atop of which is The Glade Encampment
The Mystic Forest, which surrounds the whole Encampment.
The Physical Universe which is an aspect of The Realm of Judgement and bears a mention for that reason.

eta290919
The Whole A hole in the ground usually covered by a rounded stone, where various items can be obtained when required. 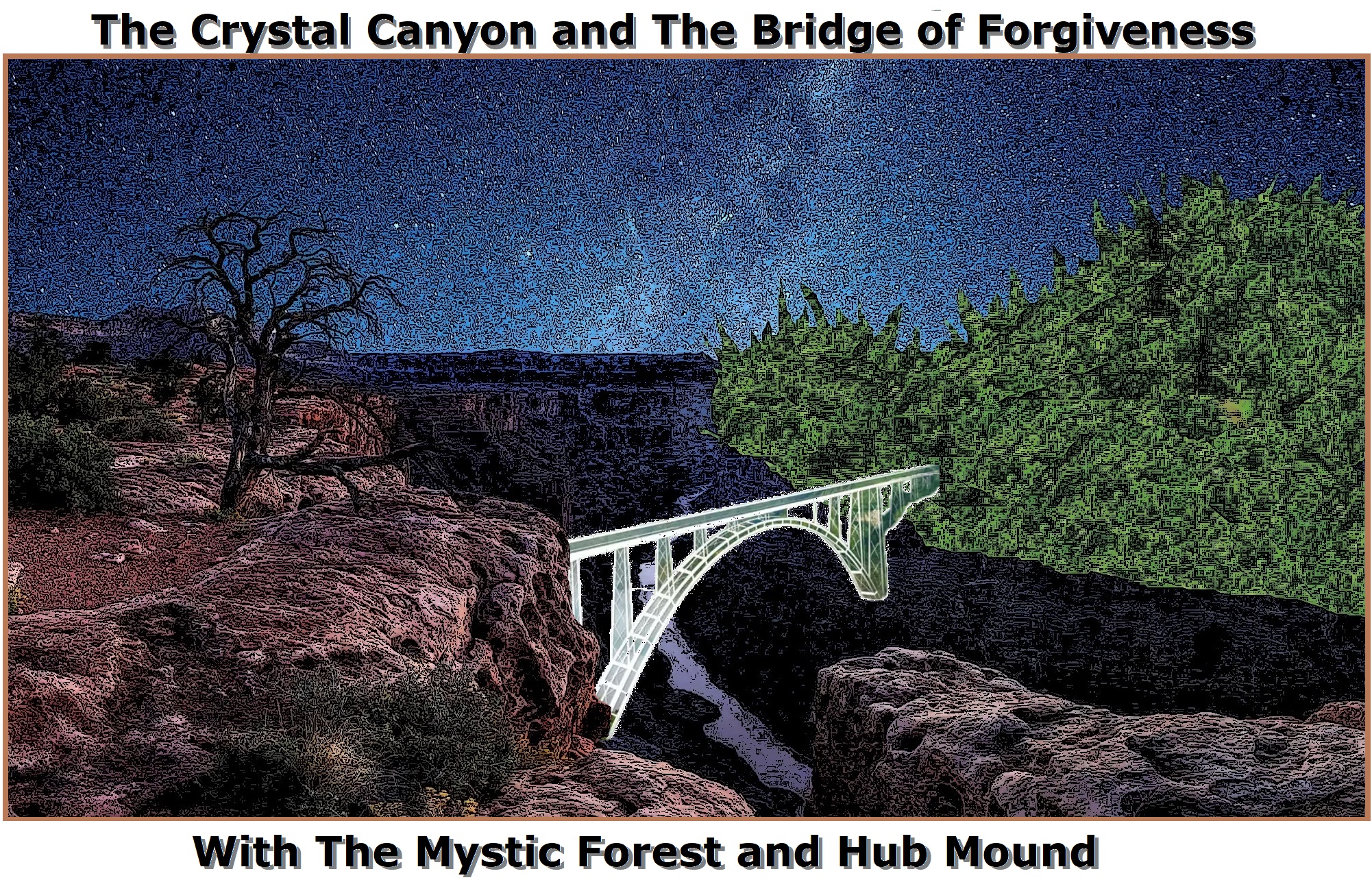 The Encampment is a large area atop Hub Mound in which the weary traveler can find rest and companionship and find direction in where they might go to from there - into the Hologram Dimensions.
Within The Encampment is the central Campfire, with all the utensils one would expect nearby, as well as a scattering of tents and small wooden buildings.

In one area of the Glade composing The Encampment, there is King Frog Pond, a place where Manu Iti goes when he needs "Quiet Time" with
The Silence - a mystical Entity which is considered The Source of All That Is and the enabler. "All That Is" is another name for The Hub of Hologram Dimensions.
In this Story The Silence is mostly referred to as The Mother and is The Central Character/Subject.

There is also something referred to as "The Whole" - which is a hole in the ground covered by a rock, which can be removed in order to then reach into The Whole and retrieve useful items.

There are a growing number of Characters developing in this Story/Act, which bear mentioning in this prologue.

Manu Iti. He was Created/Generated with the understanding that he has always existed in The Hologram Dimensions, and is the one who greets all travelers finding their way to The Encampment.
Generally each Visitor has a separate Act in which this takes place, although Manu Iti can merge Acts and there is no particular rule preventing players from inserting their Characters into whichever Act they want to, provided they observe the "No Judging" rule.
Generally Manu Iti never sees those who visit the Glade of The Encampment, but only is able to hear them. They are invisible Entities in relation to him.
Manu Iti views The Encampment as a perpetual night scene, relatively unchanging.
The nature of the Hub of Hologram Dimensions allows for all who experience it to determine for themselves how The Encampment appears to them - whether they are conscious or not that they are creating those variables.

In this Act, the next Character to be mentioned is:

Callum. Is a visitor to the Encampment, under the impression that he has lived a life very similar to those who live in The Physical Universe. He has since learned that his existence is quite a bit different than he originally thought, but is still unaware of The Hologram Dimensions.

These two are the main interacting Characters of the Musing On The Mother Story.

Other Characters in this Story are;

William (although Manu Iti always refers to William as "Wiremu". )
William is a Human who exists in the Physical Universe, which exists as an aspect of The Hub of Hologram Dimensions, and is closely connected with The Realm of Judgment.

Callum's Creator is known as

The Tanager although presently not much is known about The Tanager or his connection with Callum and William, other than what Manu Iti has told Callum already, in Act I.

What is known is that The Tanager is also from the same Universe as William.
He has never seen William/Wiremu, but is a willing co-creator (or perhaps assistant creator is more accurate) within The Encampment. He remains mysterious.

The Ruru: Is a 'familiar' who is a Morepork Owl called and converses with Manu Iti using spoken language which is generated using a particular method William developed and Manu Iti gives a brief explanation of, which can be found here.

The Bird is a small bird that enjoys dancing, song, poems, discussions and all things artistic. She is a comforting creature to Callum.

In Act I, Callum and Manu Iti have had an extensive interaction which has shown conflicting issues which remain largely unresolved.

Manu Iti decided to spend some Quite Time with The Silence at King Frog Pond, leaving Callum to entertain himself by the Campfire.

Act II will begin with the return of Manu Iti to the Campfire, having learned a thing or two while contemplating The Silence - which has allowed him to Map out a new approach in relation to interacting with Callum.

IOI's are specific to situations where the Characters in The Story-Line have access to things which appear to them.

In this example, not far into the caves entrance, there are two IOI's which the character can interact with, pick up, use immediately or carry with him, to perhaps find use for at a future event in The Story Timeline. 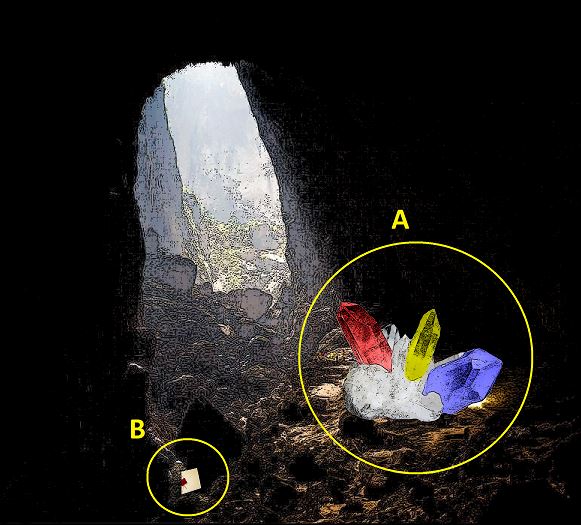 The image above shows 2 IOI.

[A] is a cluster of crystals which display the primary colors.

is an envelope. As such it contains information.

A Character is not obligated to interact with any IOI's although it is highly advised that they do.

In relation to envelopes and messages, If a Character does interact with such, they can only go so far as to open it and read it. They cannot make up what the contents of the message might be...and must wait for that to be revealed.
Top
Post Reply
2 posts • Page 1 of 1