Argue for and against Christianity 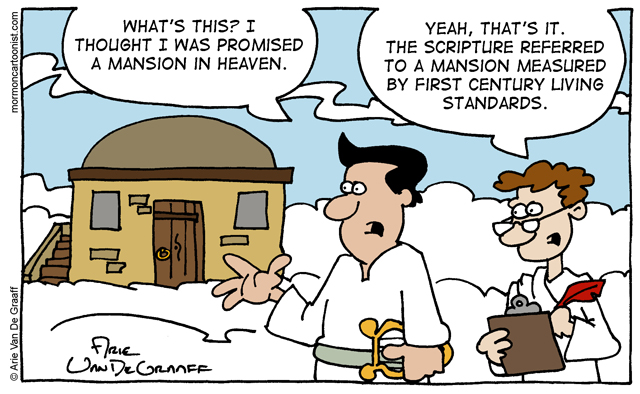 Perhaps it was a translator's error. They happen with some regularity we are told. The proper reading isn't "many mansions", but rather "mini mansions."

The KJV translated the word as â€œmansions.â€�

Since Jesus said that these â€œindividual dwellingsâ€� are in an Î¿á¼°ÎºÎ¯á¾³ - that is, a house â€“ the most likely translation is â€œrooms.â€�

Of course, professional Bible translators and editors of the most used Bible in the US don't translate as well as anonymous internet posters.

They should be informed forthwith of their errors and corrections should be announced for the benefit of the poor souls who read and believe the KJV.

This is a text book example of the fallacy of an appeal to authority.


Appeal to authority is a common type of fallacy, or an argument based on unsound logic.
When writers or speakers use appeal to authority, they are claiming that something must be true because it is believed by someone who said to be an "authority" on the subject. Whether the person is actually an authority or not, the logic is unsound. Instead of presenting actual evidence, the argument just relies on the credibility of the "authority."

Description: Insisting that a claim is true simply because a valid authority or expert on the issue said it was true, without any other supporting evidence offered.

Not every appeal to authority is a fallacy. However, here we have someone ignoring a direct explanation of the langue in order to say stand by a authority. It would difficult to come up with a clearer example of fallacious reasoning.
Top

SallyF wrote: And they call this "Heaven" â€¦?!

Most Christians I know can't stand each other.

I am sorry to hear that you view Christians that way. However, the fact that Christians regularly and willingly meet together, both in individual congregations and in larger multi-congregational groups, is evidence that your assessment is not accurate for the vast majority of Christians.
Top

The KJV translated the word as â€œmansions.â€�

Since Jesus said that these â€œindividual dwellingsâ€� are in an Î¿á¼°ÎºÎ¯á¾³ - that is, a house â€“ the most likely translation is â€œrooms.â€�


Of course, professional Bible translators and editors of the most used Bible in the US don't translate as well as anonymous internet posters.


More to the point, they don't translate as well as modern professional translators. Every major, modern English translation of the Bible renders this word as "rooms" or "dwelling places."

As usual, bjs is correct on this point.


Zzyzx wrote:
They should be informed forthwith of their errors and corrections should be announced for the benefit of the poor souls who read and believe the KJV.


They already have. Since the late 19th century, there have been several revisions (and revisions of revisions) of the KJV, all of which provide a more accurate textual basis and translation of the Bible. Readers of the KJV are almost certainly aware of this fact, as modern translations are widely known and used.
Top

William: Like 'be born again'... if "The Fathers House" were The Physical Universe, then "The Mansions" would be The Galaxies.
Top

marco: These later details took advantage of Christ's vagueness about mansions and eyes not having seen and ears not hearing. Christians are meant to bring their own furniture - and they do.

William: Everyone does. There is no avoiding that. It is the nature of the next world to unfold according to individual beliefs and attitudes. Perhaps The Perfect Instrument of Justice... [_/]
Top Who knows for sure what Heaven has to offer, but we know that it wont offer
anything negative. There will be no more sorrow or tears. No more pain and suffering.
No disappointment or jealousy, no greed.

I try to imagine myself flying through Heaven, or even swimming in it. Perhaps I'll get
to drive a really nice car or be driven around like royalty in a fancy automobile. I try to
imagine what kind of mansions we will live in up there in God's Heaven.
https://busy.org/@jamie-smith/looking-forward-to-heaven

Lotsa Christians don't give a rat's underpants about the niceties of etymology and other issue-dodging smokescreens. They EXPECT their mansion in Heaven â€¦!

And certain Christians will take money from other Christians to enrich themselves in Jesus' mighty name ...

And not a peep from Jesus to prevent this either.

Which is even more evidence that Jesus is just an imaginary friend.
"God" â€¦ just whatever humans imagine it to be.

"Scripture" â€¦ just whatever humans write it to be.
Top

In the United States, 55% of survey respondents who read the Bible reported using the King James Version in 2014 https://en.m.wikipedia.org â€º wiki â€º Bible_translations_into_English

King James Bible
John 14:2 In my Father's house are many mansions: if it were not so, I would have told you. I go to prepare a place for you.

Is difficult to understand?

The KJV accounts for 55% of the Bibles in use by US Christians. Here are the percentages for other popular translations:

Where do the majority of Christians get their information?

How, exactly, is it an appeal to authority to quote an opponent side's own literature?
.
Non-Theist

If you stop claiming knowledge of invisible, undetectable unicorns, I will stop challenging your claim. Same goes for gods

ANY of the thousands of "gods" proposed, imagined, worshiped, loved, feared, and/or fought over by humans MAY exist -- awaiting verifiable evidence

For a quick tutorial on science vs. religion, compare modern internet weather radar to ancient religious beliefs and superstitions about weather

Zzyzx wrote:
Where do the majority of Christians get their information?

A majority of Christians also don't speak English, let alone derive their beliefs from their own private interpretation of a 17th century translation of the Bible in a language they don't understand.

Moreover, the assumption that we can somehow divine what people believe simply from what translation of the Bible they use is dubious, at best.

And, for clarity, the most widely cited survey of Bible usage in the United States is the annual American Bible Society State of the Bible report, which is based on surveys conducted by the Barna Group, and shows that nearly 2/3 of American Bible readers prefer modern translations, while less than 1/3 prefer the KJV, a number that continues to decline. From the 2017 report:


Barna Group wrote:
The King James Version continues to be the version Bible users prefer most often, with 31% using this translation. However, the King James has seen a nine-percentage point decrease in usage since 2016 and 14% decrease since Barna first measured this in 2011. Use of the King James Version (KJV) is directly related to age. Nearly half of all Elders use the KJV most often (49%), compared to 40% of Boomers, 34% of Gen-Xers and 14% of Millennials.


The only thing that's difficult to understand, then, is why you thought this was a compelling argument.
Top

Zzyzx wrote: Of course, professional Bible translators and editors of the most used Bible in the US don't translate as well as anonymous internet posters.

And in this spirit, it is time once again to quote from the greatest American Philosopher of Religion, Samuel L. Clemens,

"Heaven for the climate, Hell for the company."

BTW, I've always thought the promise of paradise negated the claim of altruism touted by some as the Christian message. If you're doing something for a great reward, it hardly seems selfless.

And to return more precisely to the OP, why is their concern about the nature of the 'mansions' in 'heaven.' My understanding is heaven is a spiritual 'place.' Why any concern whatsoever about the size or nature of the residence? Why a 'residence' at all? Surely the author was using metaphor.

And now a final digression. At about age 13 I confessed to our youth pastor that I had a notion that when we died we all went to the same 'place;' that it was like an eternal church service that to the good Christian brethren it was heaven, but to me it would be hell.
Top
Post Reply
36 posts

Return to “Christianity and Apologetics”