Why, when given the choice..

Why, when given the choice..

Why, when given the choice do Democrats almost always side with the forces or chaos, lawlessness and disorder? Why do they make excuses for the rioters or deny it's happening? Or attempt to shift responsibility for the chaos from the mayors who are allowing it and the rioters themselves, to the President, AG and federal agents who are attempting to stop it?

This seems very odd given the fact the law enforcement agencies and police departments are fully integrated. So, why don't the Democrats support law and order when many, many law enforcement officers are people of color themselves? And a lawful, orderly society helps law abiding minorities as well?

Why support lawless rioters as opposed to supporting integrated police departments and law abiding citizens, of all races?

When given the choice between criminal black lives or law abiding black lives, why do the Dems almost always choose the former and not the latter?

Where are the protests demanding justice for David Dorn, or David Patrick Underwood?
My theological positions:

-God created us in His image, not the other way around.
-The Bible is redeemed by it's good parts.
-Pure monotheism, simple repentance.
-YHVH is LORD
-The real Jesus is not God, the real YHVH is not a monster.
-Eternal life is a gift from the Living God.
-Keep the Commandments, keep your salvation.
-I have accepted YHVH as my Heavenly Father, LORD and Savior.

I am inspired by Jesus to worship none but YHVH, and to serve only Him.
Top

Re: Why, when given the choice..

Why, when given the choice do Democrats almost always side with the forces or chaos, lawlessness and disorder?

You are posting a series of unsupported leading questions.

I could just as easily ask,

Why did right wingers condemn government agents in the Davidian branch matter?
Why did the NRA and conservatives support Reagan's signing of the Mulford Act which ended the Black Panther's right to defend themselves?
Why did so many Republicans defend traitor Bush's lies about imaginary WMD and whose war killed 6,000+ Americans while stealing $2 trillion from our treasury?
Why did so many Republicans harbor Eric Rudolph when he hid from federal agents and police after he bombed abortion clinics and the Olympic compound thereby killing people?
Why did Republicans go on Ted Koppel's show and praise Timothy McVeigh's attack in Olkahoma?

Now suppose I said, gee whiz, why are all Republicans such traitors, criminals, terrorists, anti-Americans, subversives, hatemongers, murderers, so inclined to promote chaos and violence??? 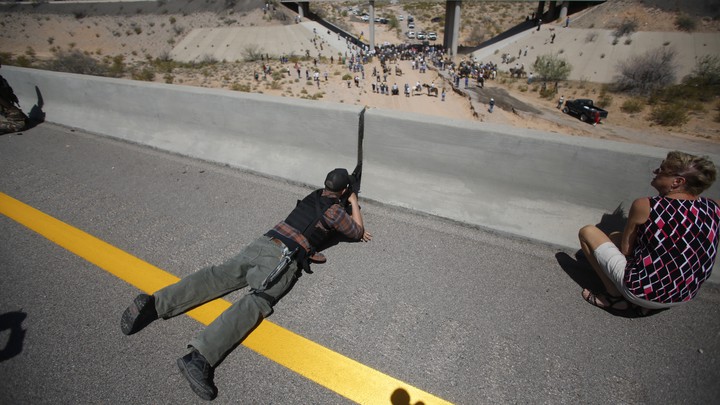 Where was the Republican condemnation of white supremacists when they killed 2 cops in Las Vegas?


Let's put some consideration into those forms of Republican chaos and then balance out the faults of these two groups - which ones are worse?
Top
Post Reply
21 posts