Purported differences in Intelligence Quotient test results along racial lines were perhaps most widely (and controversially) brought into the public eye by the 1994 book The Bell Curve, by psychologist Richard J. Herrnstein and political scientist Charles Murray. Many of us have probably seen something along the lines of this graph before; I'm using this one from Wikipedia since it's in the public domain and uses simplified/normalized distributions, though that means that it obviously doesn't reflect actual population sizes or precise distributions:

Questions for debate:
Are white people smarter than black people?
If so, what is the reason/s for that IQ gap?
Can we explain any of the racial socio-economic disparities in the USA in this way?
Can we explain why Europe has been so much more successful than Africa?
Is it ever racist to believe that white people are smarter? If so, when and why?
Edit: If a white person also believes Asians are even smarter, does that mean they're not racist?
Are there any implications here for either public policy or private conduct?
Any other thoughts?
Last edited by Mithrae on Tue Aug 04, 2020 9:40 pm, edited 1 time in total.
Against The Odds | OG's inspiring journey to Dota 2's TI8

Don't you mean: Re: Race and IQ: Are Asian people smarter?

And just to put a finer edge on it. 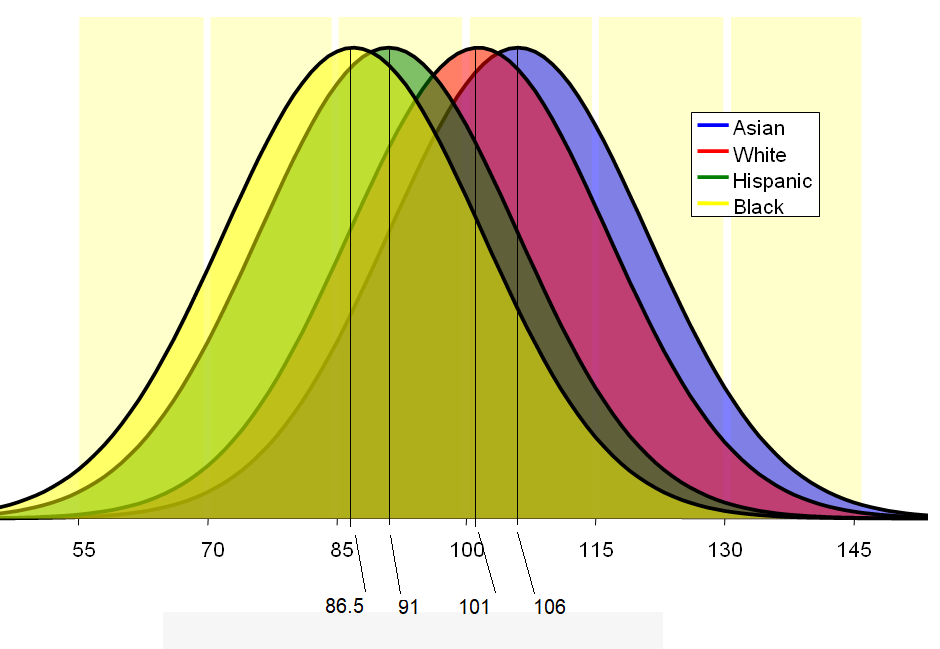 No, that's not my main question, though you've reminded me of another question for debate: If a white person also believes that Asian/East Asian people are even smarter still, does that therefore mean that they're not racist?

Why not? On a national level, one referenced source ranks the countries with highest average IQs as being Hong Kong, Singapore (74% Chinese, 13% Malay), South Korea, Japan, China and Taiwan - all with average IQ results of 104 or higher - and the countries with the lowest average IQs as being Equatorial Guinea, Saint Lucia (Caribbean, but >90% of the population having African ancestry), Mozambique, Gabon, Cameroon and Gambia - all with average IQ results of 66 or lower.
Against The Odds | OG's inspiring journey to Dota 2's TI8

Mithrae wrote: ↑Tue Aug 04, 2020 10:04 pm Why not? On a national level, one referenced source ranks the countries with highest average IQs as being Hong Kong, Singapore (74% Chinese, 13% Malay), South Korea, Japan, China and Taiwan - all with average IQ results of 104 or higher - and the countries with the lowest average IQs as being Equatorial Guinea, Saint Lucia (Caribbean, but >90% of the population having African ancestry), Mozambique, Gabon, Cameroon and Gambia - all with average IQ results of 66 or lower.

It goes back to my college days when I recall being told there were no reliable studies showing an appreciable IQ difference between ethnicities. However, thinking it over perhaps there really are, or at least differences close to those you've shown. In any case, I'm deleting my last remark. Thanks for bringing this to my attention.

I would say that acceptance of facts is never racist. But since intelligence is certainly our most distinctive and almost indisputably our most important characteristic as a species, saying that one 'race' is smarter than another is rather different from saying that they're taller or better runners or more cold-adapted etc.; parroting data or even stereotypes along those lines is obviously not as offensive as doing so in the case of intelligence, true or not. A white (or Asian) person who is racist would more likely accept information on IQ gaps with little or no hesitation or nuance, whereas one who is not racist would be more reluctant to do so and try to find other ways of explaining or interpreting the reported data. In particular, folk who express it as above, simply that "white people are smarter than black/hispanic people" - rather than emphasizing that these are (at most) averages and that an appreciable fraction of black people would still be smarter than the average white person even taking the data at face value - are quite probably conveying a racist perspective (or perhaps just somewhat below average intelligence themselves!).

I've seen this implied or stated by folk who've presented this data on another forum, that because they are promoting Asians/east Asians as being even smarter than Europeans, that must mean that they're just reporting objective facts. But it's obviously possible to be bigoted against black or hispanic people without being bigoted against Asian people; and it's also possible to be a white nationalist or even a white supremicist believing in overall white superiority while acknowledging a slight Asian advantage in this one area. Believing that a different race from one's own has a higher average intelligence does not prove that a person isn't racist.

Almost all of the information I've seen suggests that there is indeed an average IQ gap between white and black Americans, and also internationally that countries in Africa tend to have lower average national IQ scores than European and Asian countries. But that gap is largely (if not entirely) a result of environmental circumstances, and I doubt that there are four or more different ranges of intelligence based on genetic pools.

Environmentally, it's well-established (and intuitively obvious) that factors such as poor nutrition will limit the brain's maximum development potential just as it does for the rest of the body; and equally obvious especially in the international comparison that the countries with lowest average IQ scores are mostly the ones which suffer from nutritional deficiencies! To a lesser extent the same might be true in the case of discrepancies in America, with on average poorer black families perhaps less likely to have a diet as well-rounded as white families. Unstimulating environments (including poorer early education) will also limit mental development, further compounding the effects of poverty in many cases. One particularly interesting and troubling factor - whose impact would have been nearing its peak when The Bell Curve was published - is exposure to lead, a potent neurotoxin, through leaded fuels and old lead paint in unrenovated inner-city housing, disproportionately affecting African Americans. Limited access to healthcare, contraceptives and sexual education, and hence less access to early pre-natal care and higher rates of harmful behaviour during pregnancy is another area of disproportionate impact against low-income groups and countries.

Genetically on the other hand, it simply seems absurd on the face of it that average intelligence ranges would be governed by or associated with the genes for skin colour! Moreover unlike variables such as height, mass or skin colour itself, all of which can be either advantageous or disadvantageous in different circumstances and hence subject to different selective pressures, intelligence would always be a selective advantage in any region a human population moved to. We might imagine some individual, isolated culture bound to rigid tradition in which curiousity and free-thinking turns out to be a disadvantage in finding a mate, or conversely some particular culture which obsessively prizes intellectual prowess (Jewish culture might be an example of this), but in terms of a whole broad 'race' such as white or Asian that seems unlikely*: And doubly so in the case of the black 'race,' since it was in Africa rather than Europe or Asia that intelligent humans evolved in the first place, and there remains more genetic diversity within Africa than in the rest of the world combined. So not only is there an array of plausible environmental factors which can probably explain most if not all of the reported gaps in average IQ scores (both within America and internationally), but it also seems actually unlikely for there to be any broad ranking based on genetics at all. In fact there are numerous studies suggesting that when environmental factors are equal (as much as possible given that everyone has some differences in childhood and upbringing) the purported IQ gaps narrow, vanish or in some cases even seem to reverse!

Cultural biases of IQ testing is also a noteworthy area of possible error, particularly in the case of international results.

* It actually might be the case that east Asians have some genetic contribution to higher average intelligence - at least of the sort measured in Western IQ tests - based on the fact that countries like Vietnam (~$2566 GDP per capita) and especially North Korea (~$1700 GDP per capita and only 25 million population) nevertheless rank very highly in at least one major international intellectual competition, the International Mathematical Olympiad; the opposite of what we'd expect if environmental influences were the dominating variable. On the other hand fish consumption tends to be pretty high in east Asian countries and South Korea in 2018 was the world's biggest fish consumer per person; omega 3 fatty acids, obtained most widely from fish, are "vital for normal brain function and development" and from some spreadsheeting I did a few years ago there seems to be a (rather loose, with some stark exceptions) correlation between national IQs and fish consumption. So perhaps that helps explain things?
Against The Odds | OG's inspiring journey to Dota 2's TI8

Let the scientists figure these out. I will go with their consensus.

I will try and answer the following, assuming that white people are smarter, as suggested by the chart.

Can we explain any of the racial socio-economic disparities in the USA in this way?

Maybe, but not every aspects of it given data on things like income disparities normalized for education level.


Can we explain why Europe has been so much more successful than Africa?

The Romans left a strong foundation and success breed success?


Is it ever racist to believe that white people are smarter?

Yes, when it is also believed to be inherent in the race.


If a white person also believes Asians are even smarter, does that mean they're not racist?


Are there any implications here for either public policy or private conduct?

No. The variance within one race is much higher than the variance between races.
Top
Post Reply
6 posts • Page 1 of 1