Do you have an interpretation of this verse?
If so I would like to hear it ,that is interpret each element of the verse.
Top 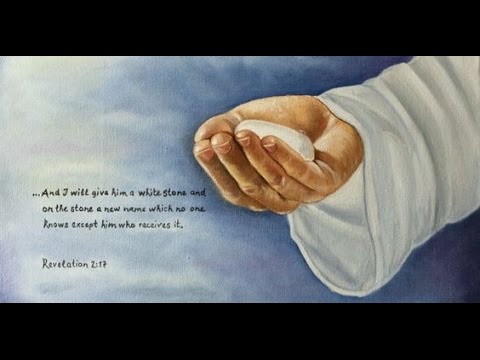 To learn more please go to other posts related to

THE LAST DAYS , MESSIANIC PROPHECY and ... THE BOOK OF REVELATION

We all know about someone being "black balled" Getting a white ball is approval. Of course back then stones were easier to find than balls.
Top

Red Wolf wrote: We all know about someone being "black balled" Getting a white ball is approval. Of course back then stones were easier to find than balls.


The use of wooden or ivory balls for secret ballots (which is where the expression "blackballed" comes from) probably does have its origins in roman times. In Roman courts, pebbles were used in passing judgment, thus the biblical imagery.

I echo the others. Its like the old lot drawing and white was safety. It also implies the subject of this verse will know he has gotten the approval and the new name. It may have been a way to recognize leaders in semi-secret as persecutions were happening.
Top

The "hidden manna".....In Moses' day the manna was a provision from Jehovah to keep the Israelites alive. The manna was "hidden" inside the Ark of the Covenant which was in the Most Holy compartment of the tabernacle, where no one was allowed. Jesus said that his anointed followers who conquer would eat "the hidden manna." Like Christ, they get to enter---not a holy place made with hands(the physical temple), which is a copy of the reality---but into heaven itself (Hebrews 9:12,24). At their resurrection, they become incorruptible and immortal, symbolized by their being given the imperishable "hidden manna."

Interesting thought: Does all of this mean that if you have the hope of living on Earth rather than in heaven, you are somehow insignificant or unimportant? No...even though a person does not receive the white pebble that the anointed Christians get, a person may come out of the Great Tribulation to have a part in the awesome work of restoring Paradise on Earth. With you will be the resurrected ancients who were faithful to Jehovah, and the "other sheep" who may have died more recently as well as those with you who came through the Great Tribulation.

What is the "new name" written on the pebble? A name is a means of identifying a person, distinguishing that person from everybody else. The anointed Christians get the pebble after they have finished their life on Earth, and they have conquered. So the name on the pebble has to do with their privilege of being united with Jesus in heaven, an intimate position of royal service. It is, you might say, a designation of office, "which no one knows except the one receiving it." (See also Rev.3:12.)

Would not the "hidden Manna" be spoiled? As they were only to take enough for the day?
Top

The manna in the Ark of the Covenant never spoiled.

I meant of course IMMORTALITY.


I dont think the manna in the ark would have rotted because when it fell for the Israelites God miraculously preserved it for the Sabbath, so he would have done the same thing in the ark. I cant jmagine the ark being full of maggots because there was food in it.
INDEX: More bible based ANSWERS
http://debatingchristianity.com/forum/v ... 81#p826681


earl wrote:Do you have an interpretation of this verse?


* He that hath an ear, let him hear what the Spirit saith unto the Churches.

* To him that overcometh will I give to eat of the hidden manna.

* And, will give him a white stone and in the stone a new name written, which no man knoweth saving he that receiveth it.

In ancient times, small stones were used as tickets to public functions and feasts (pagan). They were not necessarily white, but shinny with some type of emblem on them. The reference here seems to coincide with the giving of the white robes in Rev. 7:9, which assures entrance into the Kingdom of God and eternal life.
Top
Post Reply
13 posts