Evidence For And Against Evolution

Creationism, Evolution, and other science issues

Evidence For And Against Evolution

Came across this little gem a bit ago and thought I'd share. 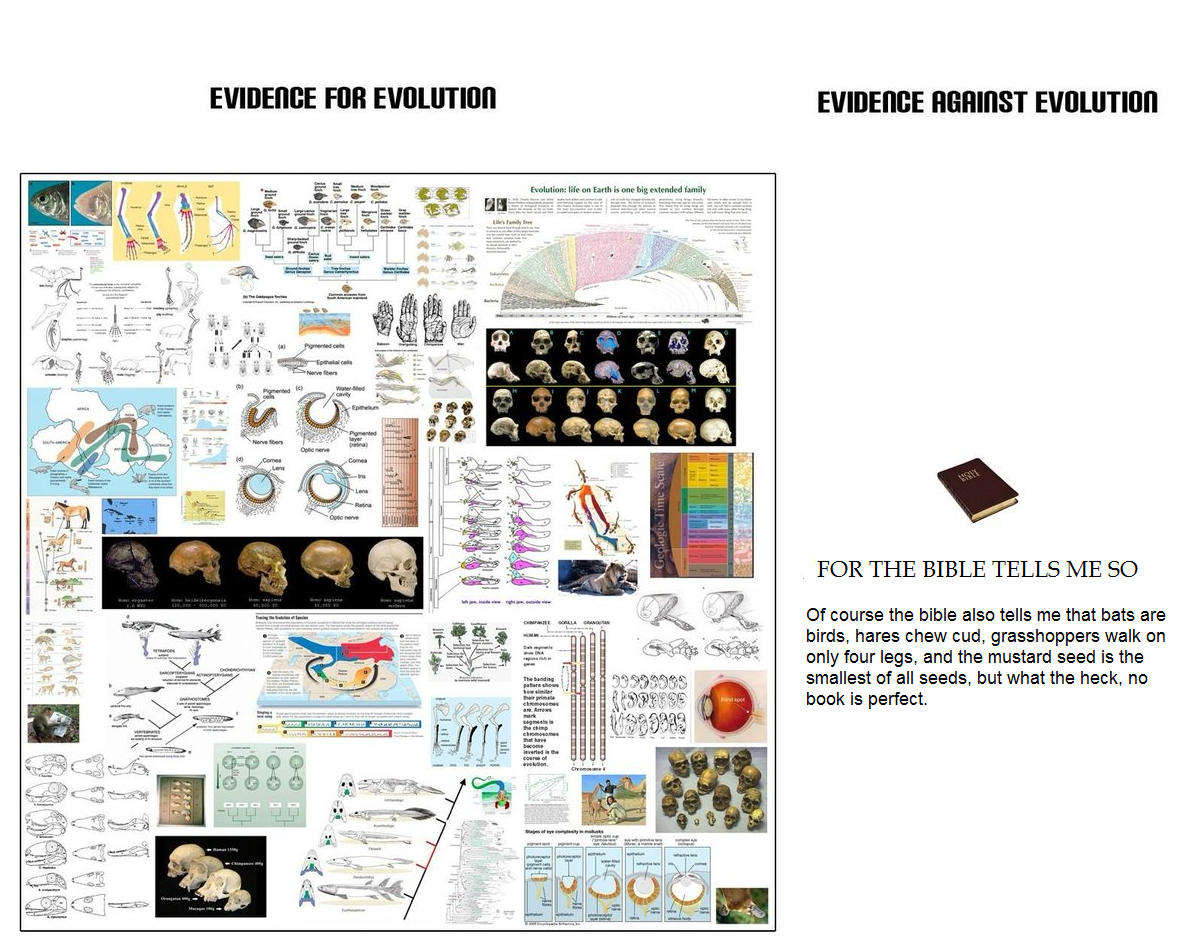 Re: Evidence For And Against Evolution

EarthScienceguy wrote: ↑Wed May 05, 2021 10:49 am A faithful husband has to choose all the time to be only intimate with his wife and not others that he may be attracted to for the good of his wife and family. And when he makes that decision his love for his wife and his attraction for his wife follows his actions.

Yes, but that still doesn't address the point that the faithful husband did not choose to be attracted to some other lady in a bar.

That's backwards. People only choose to be intimate with someone where there are prior feelings. While actions do produce feelings in sort of a feed back loop, it is feelings that kicks the whole thing off.
Top

Re: Evidence For And Against Evolution

Clownboat wrote: ↑Fri Jun 04, 2021 1:45 pmNo one is making these distinctions and you are at war with the English language to define children as those under 50.

My point is that someone could define a child as anyone under 50, or the dictionary could, and that what age you put to people being responsible and ready for sex now is completely arbitrary.

My point was that you are at war with the English language just trying to make your point and that no one is making the distinctions you thought up. Thus you have failed to make a point for me. You are just at war with language here by referring to a 50 year old as a child. I don't think calling a 50 year old a child will garner much traction.


I'm not turning anything into anything. I gave examples that illustrated that you can make any distinction you want in order to condemn others while keeping technically to your rule and in practice restricting something you hold dear from others.

I reject your claim that we can call a 50 year old a child and so does the rest of society. Your distinctions are rejected for being nonsensical and at war with language.
I asked this of you: "Feel free to show that you actually hold one of these distinctions as dear and we can follow it to its logical conclusion."


And in the racist world, only the miscegenator would find your argument convincing. The distinction you made is more about who's in the minority, and about society, than it is about right and wrong.

Societies rule. Change that and you would have a point.
In a society where it is ok to have sex with children, not allowing gays to do so would be wrong. Thank goodness we don't live in such a society like that or like what you allude to above. Again, if we did, then we would have something to discuss.

You're basically asking, but what if society was not like it is, but like something that it is not? Excersice in futility?


Clownboat wrote: ↑Fri Jun 04, 2021 1:45 pmSociety has determined that children are not of the age to consent to such things. Your point is irrelevant for being irrelevant. You would first need to show that society is wrong, but you may end up just showing that you are a pedophile. (Not that I actually think any of these things about you personally).

Society may be wrong or it may be right.


Society is what it is. I'm not seeing right/wrong as such things change as do societies.
If being gay was the societal norm, restricting straight people from being with the one that they love would be wrong because they are restricting something they hold dear for themseleves from another qualifying member of society.


My only point is that the distinction you made is arbitrary.

Let's test this. Again:
"Feel free to show that you actually hold one of these distinctions as dear and we can follow it to its logical conclusion."


You can always make an arbitrary distinction and say, eww, that's yucky, I hold dear cooking and eating, but I do not hold dear eating avocados; they're just gross, so let's make a law banning avocados.

You would be onpoint to say you love avocados and hold them dear in fact for some reason. But you know those gays, I don't believe they should be able to love avocados like I do. You're not doing this though.


Yes, we would, but that person is still doing exactly what you are doing and simply making a distinction where he happens to please in order to have what he holds dear and restrict it from others due to the distinction.

"Feel free to show that you actually hold one of these distinctions as dear and we can follow it to its logical conclusion."

It is wrong for a person who lives within a society (like all humans) to seek to restrict something they hold dear for themselves from another qualifying member of society. If your goal is to argue that we might as well just default to societal rule, then make your case. You'll likely lose me as soon as we start restricting something society hold dear, just because a human is black or gay for example.
You can give a man a fish and he will be fed for a day, or you can teach a man to pray for fish and he will starve to death.

I blame man for codifying those rules into a book which allowed superstitious people to perpetuate a barbaric practice. Rules that must be followed or face an invisible beings wrath. - KenRU

It is sad that in an age of freedom some people are enslaved by the nomads of old. - Marco

If you are unable to demonstrate that what you believe is true and you absolve yourself of the burden of proof, then what is the purpose of your arguments? - brunumb
Top
Post Reply
352 posts

Return to “Science and Religion”