Jews In The Holocaust

Jews In The Holocaust

Were I a Jew, I would not want the Holocaust remembered because it raises too many painful questions about the so-called chosen people's popularity with God.

One has to ask, in point of fact there has been more than one rabbi ponder: How is it that so many of Moses' people were caught up in the Holocaust? Where was God during all that? Why didn't He step in and do something to protect His chosen people?
_
Top

WebersHome wrote: ↑Thu Jan 06, 2022 11:45 amThe error of that interpretation is so obvious that it's almost below me to point it out; to wit: Judaism regards human sacrifice as a breach of the covenant that Moses' people agreed upon with God; and also sincerely believes that human sacrifice is an abomination.

Considering the degree of antisemitic victim-blaming you've needed to otherwise justify the Holocaust, I think it's so obvious that it's almost below me to point out that the most likely explanation is that there are no gods at all.

No good gods, anyway.
My preferred pronouns are he, him, and his.
Top

The Jews' association with their God is governed by the covenant that their ancestors agreed upon with Him (on oath) per Exodus, Leviticus, Numbers, and Deuteronomy. That agreement forbids revision.

• Deut 4:2 …You shall not add anything to what I command you or take anything away from it, but keep the commandments of the Lord your God that I enjoin upon you.

Seeing as how the covenant does not specify human sacrifices, then to do so is a breach of covenant; and quite curse-worthy.

Christ's human sacrifice is valid via a different covenant: which the Jews, as a corporate body, have yet to officially accept.
_
Top

Christ's human sacrifice is valid via a different covenant

My preferred pronouns are he, him, and his.
Top

.
It isn't unusual for Bible-teaching Christians to be accused of hate speech and/or anti Semitism while Jehovah's very own criticisms, and the prophets' writings too, contain far more. For example: the book of Isaiah opens with this:

• Isa 1:1-3 . . The vision of Isaiah the son of Amoz, which he saw concerning Judah and Jerusalem, in the days of Uzziah, Jotham, Ahaz, [and] Hezekiah, kings of Judah. Hear O heavens! and give ear O earth! for Yhvh has spoken. Children I have raised and exalted, yet they have rebelled against Me. An ox knows his owner and a donkey his master's crib; but Israel does not know, My people do not think about it.

Oxen and burros are well known for their below-average IQ; but in His indictment, Jehovah complained that those two species of barnyard beasts of burden have more brains than His own people when it comes to appreciating His providence; and Jehovah's statement: "they have rebelled against me" mirrors the age-old colloquialism of biting the hand that feeds you.

There are so many anti-Semitic comments and remarks throughout the book of Isaiah that sometimes it's actually difficult to believe it wasn't penned by a Palestinian instead of a patriot; and that's only Isaiah, some of the other prophets are just as harsh.

NOTE: More than fifty percent of the Jews living in the State of Israel right now today are hiloni (secular). In my estimation, that's easily enough insubordinate Jews all in one place for God to justify bringing down the whole country; and then if you combine those with the number of insubordinate Jews all 'round the globe, including the USA; it's not difficult to appreciate just how insecure Israel's future really is.

A co-worker once informed me that his Jewish wife was seriously considering migrating to Israel to help with its reconstruction. I advised him to talk her out of it because without Messiah on the throne, that place is not safe. Plus, the Jews' God has an era scheduled for them called the time of Jacob's trouble when that land and its people will experience woes far more severe than any before. In fact without Messiah's intervention, and were not that time kept brief, not one single Jew in Israel would survive; it's going to be that bad.
_
Top

Since there are many Bible-teaching Christians that manage to avoid hate speech and there's no shortage of non-Christian antisemites, I don't think the Venn diagram is quite what you're implying.

Antisemitic hate speech is OK because you think Jesus agrees with you?

How is that different than this: 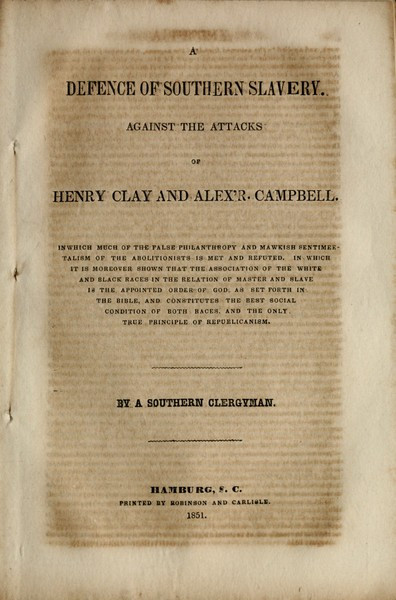 Or was "A Southern Clergyman" actually right?
My preferred pronouns are he, him, and his.
Top

.
There's a holocaust pending in the book of Ezekiel that doesn't get much attention.

• Ezek 20:33-38 …As I live-- testifies The Lord God --I will reign over you with a strong hand, and with an outstretched arm, and with overflowing fury. With a strong hand and an outstretched arm and overflowing fury I will bring you out from the Gentiles and gather you from the lands where you are scattered, and I will bring you into the wilderness of the Gentiles; and there I will enter into judgment with you face to face.

. . . As I entered into judgment with your fathers in the wilderness of the land of Egypt, so will I enter into judgment with you-- testifies The Lord God. I will make you pass under the shepherd's staff, and I will bring you into the bond of the covenant. I will remove from you those who rebel and transgress against Me; I will take them out of the countries where they sojourn, but they shall not enter the land of Israel. Then you shall know that I am The Lord.

Many Jews will be rejected and denied entrance to Messiah's theocratic kingdom. Ezekiel's is a frightful picture of the Diaspora's impending meeting with their God.

So; what's to become of the rejects?

• Matt 13:40-43 . .As the weeds are pulled up and burned in the fire, so it will be at the end of the age. The Son of Man will send out his angels, and they will weed out of his kingdom everything that causes sin and all who do evil. They will throw them into the fiery furnace, where there will be weeping and gnashing of teeth. Then the righteous will shine like the sun in the kingdom of their Father. He who has ears, let him hear.

It's been my own personal experience that the average Jew honestly considers themselves righteous enough to survive their day in court face to face with The Lord God. Well, just think back to the time when God entered into judgment with the Jews when He brought them out of Egypt. How many adults over the age of 20 entered the promised land? Only two: Joshua and Caleb. Not even Moses himself made the cut; nor even Bezalel and Oholiab, the two artificers endowed with special skills and aptitudes by God's own spirit.
_
Top
Post Reply
16 posts