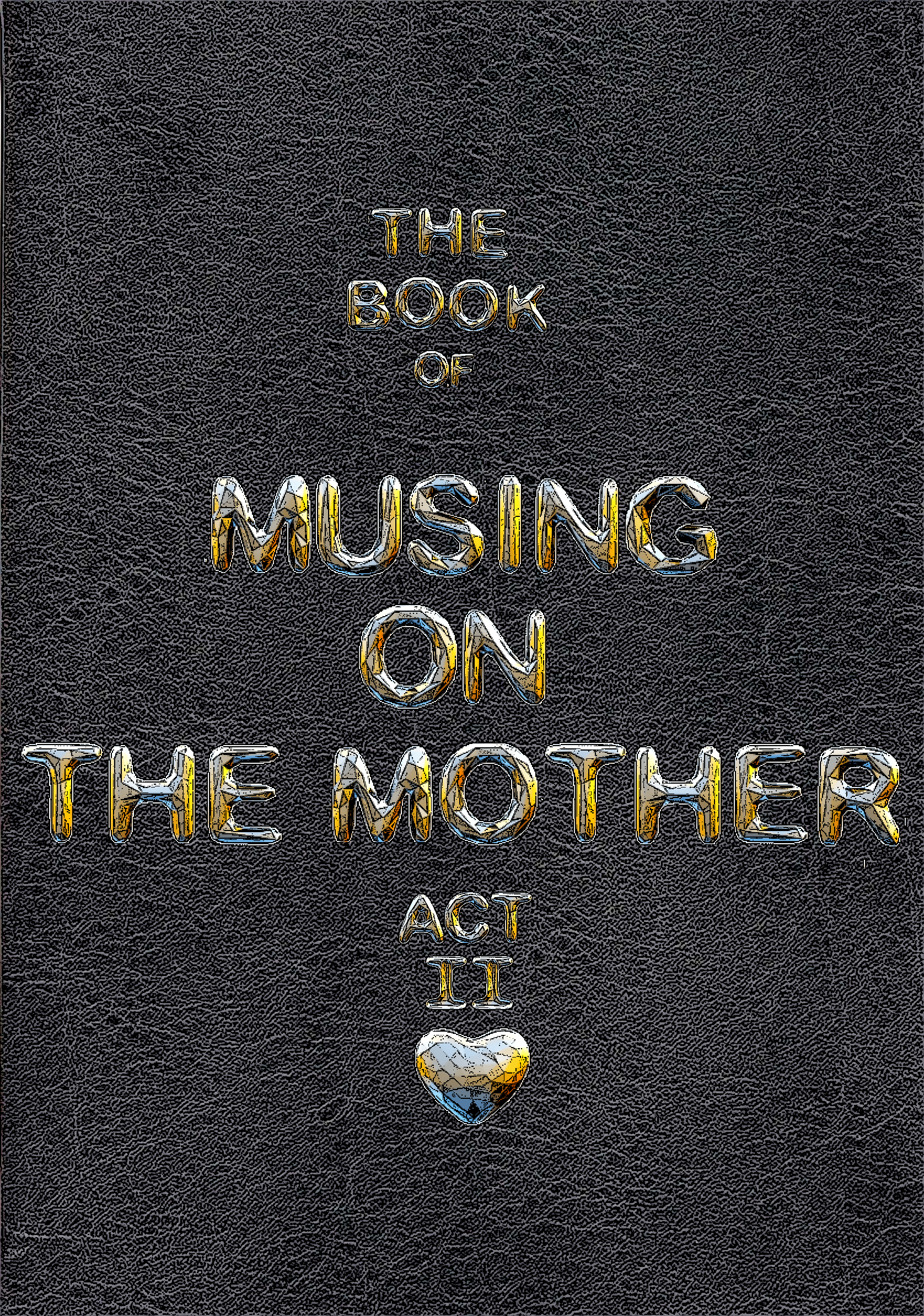 After spending a portion of my Quiet Time communing with Wiremu at King Frog Pond, I sit back for a time contemplating what I learned from the interaction, before making my way back up the path and into the main Encampment.

The light of the fire beckons as I approach.

I immediately move to The Whole and retrieve from within it, a small booklet which I place in the folds of my garments, and then find my place beside the fire.

Beyond the Twelve Judges Mountain Range, the light from The Realm of Judgement appears to have dimmed a little.

I help myself to a mug of tea, and set a flame to my pipe, which I had stoked with 'erb much earlier and then neglected to smoke at the time.
As I settle back, I hear the call of The Ruru, and reply to Her greeting.

I awaken at the call of The Ruru. As the sleep falls from my eyes I raise to one elbow and look towards the fire. I eventually make out that Manu Iti has returned from his trip and is back at the fire. I rouse myself, making my way towards the fire, stumbling a few times over roots or rocks. I think back to the first time I approached the fire with Manu Iti and smile. I hope he has had a peaceful retreat. I have enjoyed the time alone with The Tanager and the world around me, but I welcome his return.

Callum: Why hello, my friend. It's good to see you again. I hope your journey went well.
Top

Suddenly I hear Callum's voice welcoming me back from my time away. I look to the direction of the sound and smile.

Mani Iti: Greetings Callum! I was not sure that you were still here with us, but I am heartily glad that you decided to remain!

I take a swig of tea, smacking my lips together in exaggerated sounds of pleasure.

Mani Iti: My 'journey' - if it can be called such - was down The Garden Path to King Frog Pond....a stones throw away!

It wasn't as adventurous as a Coddiwomple, but was certainly very revealing and helpful for that! Thank you for asking!

I see a bright movement of light from the direction of the path to the Bridge of Forgiveness...quickly making its way up Hub Mound toward us.

Mani Iti: And yourself dear Callum? Did you enjoy our book!
It is amazing how many pages can quickly unfold with discussions on The Deep and Meaningful. Quite the Story-Makers!
Top

Manu Iti greets me. I smile back, then stretch and try to stifle a yawn.

Callum: I had a good time. I'm not even sure how much time passed, but it does not seem like it was much. Then again, King Frog Pond seems further away to me than to you, so who knows with this world. I enjoyed reading the book. It may have even helped me to sleep a few nights...but don't worry, that was when I was reading my own words.
Top

I chuckle at Callum's sense of humor, as I watch the flickering blue-green light rapidly approaching our position.

Manu Iti: Yes - I too enjoyed reading our Book of The First Act...

As I finish my sentence, the source of the light takes the shape of a small - perhaps foot-high - stick figure, engulfed in fire and leaving small evenly spaced flames behind where his feet had touched the grassy space between the Mystic Forest and the Encampment.

Manu Iti: Well look who we have here! Master ColdFire!

The small stick-man tips his pretend hat and waves as he circles the campfire before giving a high pitched long whistle and then suddenly jumping into it.

Immediately, the campfire changes from a golden-yellow red-tinged color, into the same blue-green flaming colors which had engulfed Master ColdFire.

Manu Iti: Well Now! We won't be having to put any more branches on our fire while he's in there Callum!

I laugh at the joyful spectacle just witnessed. I love this place!
Top

A strange flaming figure joins us as Manu Iti is talking. He says it is Master Coldfire. I wave to him as he circles the fire and then he jumps in. The display of colors is dazzling. Manu Iti implies that this will keep the fire going without us needing to add fuel.

Callum: I wish he had come earlier. I got a few splinters from all the firewood I collected while you were away.

I look at my hands, but that initial thought quickly goes away.

Callum: That's a lie, actually. I found collecting wood quite peaceful. Hard work is much better for the soul (and body, for that matter) than lazing around.
Top

As Callum finishes his words about The Soul, an horrendous tortured scream of terror comes from within the fire, and suddenly the flames turn blood-red - filling the whole site with a gruesome dark light.

Manu Iti: Oops.
It seems that your words have brought Judgement upon Master Coldfire and he is paying the ultimate price for his carelessness!

Master ColdFire's screaming continues, but appears now to be coming from every direction around us, rather than from the fire itself.
The whole scene has changed in an instant, into something reminiscent of some horrendous hellscape.
I shout above the commotion...

With that, I am gone, as I turn and run in what I think is the direction of King Frog Pond...
Top

Immediately after talking about the peacefulness of collecting wood a blood-curdling scream emits from the fire, which changes to a blood-red color, trying to eat up the light around us into darkness. Manu Iti believes that my words have had something to do with this and that Master ColdFire was acting carelessly. I'm not sure why that is the case, but Manu Iti knows this world better than I.

Then Manu Iti seems to be experiencing a change of scenery before him, although it looks the same as it was to my eyes. Manu Iti yells to flee, although I'm unsure of whether he talks to me or Master ColdFire or both. After collecting myself, I start to move towards the fire to try and pluck Master ColdFire from its torment. I succeed in pulling the little Master from the fire and the screaming stops. He smiles at me. There is a rush of sound in the distance, however. I wonder whether it is some waterfall that I had not heard before, for it sounds a bit like that, but at times the sound hints of screams. Perhaps that is simply an echo in my head, from the previous screams. Master Coldfire sits beside me, picking up leaves that slowly disintegrate in his stick hand.

I look around with no sight of Manu Iti. I wonder what caused his fear. I thought he had creative powers over this world. Perhaps William has the creative power and he is evil? Or perhaps there is still some good that this could bring? But Manu Iti also seemed to talk about there being no good and evil. I look back at the little Master.

Callum: I guess it is just us, Master ColdFire.
Top

Master ColdFire and myself laugh with the joy of it all! We assumed that Callum would have fled, but as we performed our wonderful phantasmagorical trick, we noticed a small burning branch levitating from out of the campfire and hover over to where Callum seats himself, and quickly realize that Callum must have thought to rescue Master ColdFire from the flames and thinks that he has done so.

The still burning branch settles onto the wooden planking which serves as seating around most of the campfire...then I hear Callum say "I guess it is just us, Master ColdFire."

Master Coldfire then floats up above the fire - holding his pretend belly, as he doubles over with unconstrained mirth, his stick frame shaking with the intensity of it, little green-blue flames dancing off of him in the process, and floating their way out to merge with the StarScape.

I wonder why The Tanager has not informed Callum that he cannot control Wiremu's Characters and further wonder if I should inform Callum myself or just let him work it out from the evidence.

But mostly I am well pleased that Callum is learning to understand how this place works in relation to ones imaginative creativity, and am happy I did not have to send The Ruru after him, with a note saying "It was just a trick! Please come back!"

I go to take another swig of tea but quickly decide against it as another round of giggles echo up from my belly, exit my mouth and are flung out into The Hub of Hologram Dimensions.

I catch Penny Tupence observing the event and see that She too has cracked a smile...Life Is Goodness...
Top
Locked
90 posts