[center]This Thread has been split as an edit from The Main Thread "Musing On The Mother Act III. The thread is locked until if or when there is further notice..

Conversation leading up to the decision to split this thread @

Ngaru Whaea studies Callum as he gives Her his answers. She looks bemused.
Finally Callum becomes silent and then the air is fulled with the sound of thousands of Cats meowing.
She allows the sound to build for a moment and then raises her arm and immediately the meowing ceases.

She then looks over Callums head towards a mountain range far in the distance and points in that direction.

The one called "Ruthie" come forward.

There is a meow in answer and movement...

Ngaru Whaea then focuses Her attention on the Cat approaching Her as She asked it to.

Ngaru Whaea: I Have Spoken

With that, Ngaru Whaea becomes silent and fixes Her gaze upon Callum.
Last edited by William on Mon Dec 09, 2019 12:29 pm, edited 2 times in total.
Top

As Callum enters the Cave, he say's goodbye to Ruthie, thinking that he sees Her turn and dart away. He has forgotten that he cannot control the actions of another Creators Character and Ngaru Whaea allows him his illusion, and once his back is turned, Ruthie darts through the entrance just before the EEF engages again and seals that way as an exit from the Cave.

The floor of the entrance is quite littered with the rubble of loose rocks and Ruthie - Queen Ngaru Whaea 'eyes' for now - takes advantage of Callums having to take care walking on the rubble, by concealing Herself in the Shadows, unnoticed.

Three or four clacks into the cave entrance are items of interest [Note] . Hopefully Callum will not miss them.
Top

As I walk through the beginning of the cave, I notice a few crystals of varying colors and a loose envelope lying nearby.

Callum: Manu Iti, what do you make of these crystals and envelope?
Top

As I continue to examine the DP Introduction, I am interrupted by, and puzzled with Callum asking me what I make of the crystals and envelope left near the caves entrance.

I close the link.

Manu Iti: Would you like to interact with these IOI's Callum?

I then wonder if Callum is asking for advice...

Manu Iti: If you want my advice on interacting with these items Callum, what I can say is that messages contained in envelopes more often than not, will be integral to you navigating through the cave system. As to the crystals, I would at least examine these and probably place them in my knapsack, as they appear to be quite unique and likely will have some use, further on into the adventure.
Top

While I await Callum's reply, I decide to tell him about the latest Generated Message to do with The Dohrman Prophecy book.

Manu Iti: So then Callum. I Generated a Message recently which made mention of an introduction of an old book which I believe I may have read a long time ago.

In searching for and finding the introduction, I have The Distinct Impression [_/] that last time I read it, I completely missed the idea that the main Character - a Human by the name of "Cadriel" - who comes from an Ancient Tribe which practiced inner visualization in order to interact with said visualization in a real way.

My impression is that when I first read that introduction, I completely missed seeing that point...the the story was about him experiencing a story as real, in his mind.

I chuckle at the irony of that - and continue...

Manu Iti: I suppose the point of me sharing that with you is to focus attention back to our discussion of using the String-List and Generating Messages...

Do you remember where we were at in that conversation?

I leave it at that, as I feel that Callum is contemplating the cluster of crystals, and don't want to distract him any further than I already have...

Manu Iti: I understand you are busy deciding what to do with these IOI's, but if you would like to talk more on the Generated Messages, just let me know, for I am keen to continue our discussion on the Science of the Process...
Top

While Callum is deciding what to do with the IOI, I occupy myself with continuing where I left off with the The DP introduction.

I am up to the Prologue part of the DP story...it appears to be about a Human Being called Cadriel, who is walking in an ancient forest in the predawn darkness - it is a forest he has created in his mind, and he explores its mystery to find what might be hidden behind the mystery. He is looking for something real...

This was a practice of certain members of his Tribe. Sometimes he complained to The GrandMother about his lack of results and she would always answer , "When your intention and your heart walk on the same path, you will be able to see what is real about the shadow", so he would always keep trying...even though he was not sure exactly why he was trying to do it...

This time though, things were different. And it came, not with a shadow, but with a strange, pulsating glow of light filling the western end of the normally dark forest.

Cadriel was naturally curious because this was something new, but just as quickly his curiosity turned to fear, as a low growl, felt more with his body than heard with his ears, spilled onto the forest floor.
The woods he was in, exploded instantly with restless birds, crickets, frogs and squirrels echoing their cries of panic. A wild and contagious terror spread throughout the forest like an electric shock reaching all the inhabitants regardless of their size. All the creatures in the forest were welded together as one organism, observing and feeling with their trembling senses.

I see right there, is where Cadriel became aware of the reality he was looking for and at the same time, he completely forgets that he is in a story in his mind. I suppose that is the whole point of experiencing something as being real.

He was no longer in his comfortable dwelling with his Wise old GrandMother so close to him that he could reach out and touch her, but he was now absorbed completely by the very thing he was attempting to do. So absorbed and now so frightened, that he appears to have forgotten his prior reality altogether. So captivated by his experience in his mind being made real for him to interact with.

Still using the 10x Word-String List comprising of 479 pages, I randomly select a page and from that, Generate a Message...the page number selected is 60.

Generated Message: The Lord Nuclear We Can Do Magic! Warm Presence Welcome The Dolphins And Whales Shallow The Ruru An Opportunity To Commune Sangreal Mind/Thought Space Written In The Clouds
The Right Tool For The Job Inspection OWOBIK Love Takes One For The Team Child
Extreme Attention to Detail Spring Loaded Paradise Entityism Hyper-normalisation
QueenBee Form Builders Significance The Idea of Worship - What Does It Mean How
Prevailing Influence Healing The Beast What Are Your Thoughts Music Stay The Course
Earth Mother Wow! Contumacious Play Chess Apocalypse The External Voice The Main Points on the Agenda YHWH God/Source/Home I Think I Could Still Love Even In Total Darkness Astral Explorer Hide and Seek Out of Proportion Dualism Separates Because Oneness Remains Hidden From Its Selves Unknown Symbol Source Intelligence and Lyricus facilitate the process throughout the Grand Universe Productive Rationality Anti Theism


I ponder on the Message and am aware of my thoughts and how they are shaped by the Message...in conjunction with my external reality. I then continue to read from the Prologue part of the DP story... Cadriels shock is only causing momentary amnesia, and he is soon remembering his GrandMother and Tribe again, whilst still experiencing the light and sound and smell and feel of the forest in his mind, as real.

Effectively he is in two worlds at the same time, but his dominant reality is now the forest setting. He is confused by the merging of realities and worries that he should run and warn his Tribe of the possible danger within the forest...

But there is a part of him he becomes aware of - and refers to in the feminine. She seems more controlled and purposeful and at ease and he feels his feet move toward the light and sound, rather than fleeing from them, as he would be doing - instinctively - of it were only up to him...
Top

Manu Iti gives me some advice on the IOI's. I put the crystals and envelope into my bag. I then continue walking. Manu Iti then draws our attention back to the generated messages.

Callum: As far as I can recall and see, you were responding to what you thought was my argument that a message is scientifically invalid if it can be interpreted differently. That was not my claim. I was basically saying two things. One, that the generated messages were not good, scientific evidence for their being an intelligence outside of ourselves (although I do think there is an intelligence outside of ourselves).

And, two, that this generated-message method of communication would be a very poor choice by said intelligence, if it wanted to get a specific meaning to us. If it controls us to get the message it wants, then the method is a useless charade. If we are free beings in some sense, then there is so much that could get in the way of its intended message. Our choice of words and phrases to use, for instance. Or our own reading into the generated message's gaps.
Top

Callum places the envelope into his Knapsack along with the crystals and moves into the caves diminishing darkness, while telling me what he thinks of the Generated Messages.

Manu Iti: It might be a good idea if you get your torch out from the knapsack Callum. It gets very dark very quickly in this part of the cave.

I decide to wait until Callum has his light on things and formulates some kind of plan for getting through the labyrinth, before getting into deeper discussion about The Generated Messages.
He appears to be uninterested in what is contained in the envelope, or distracted about something else perhaps...
Top

Manu Iti advises me to get the torch out of the knapsack. I do. I then decide to look at the envelope as my curiosity gets the better of me and it reads...
Top

Callum decides to open the envelope and finds a Note and what appears to be a section of Map; 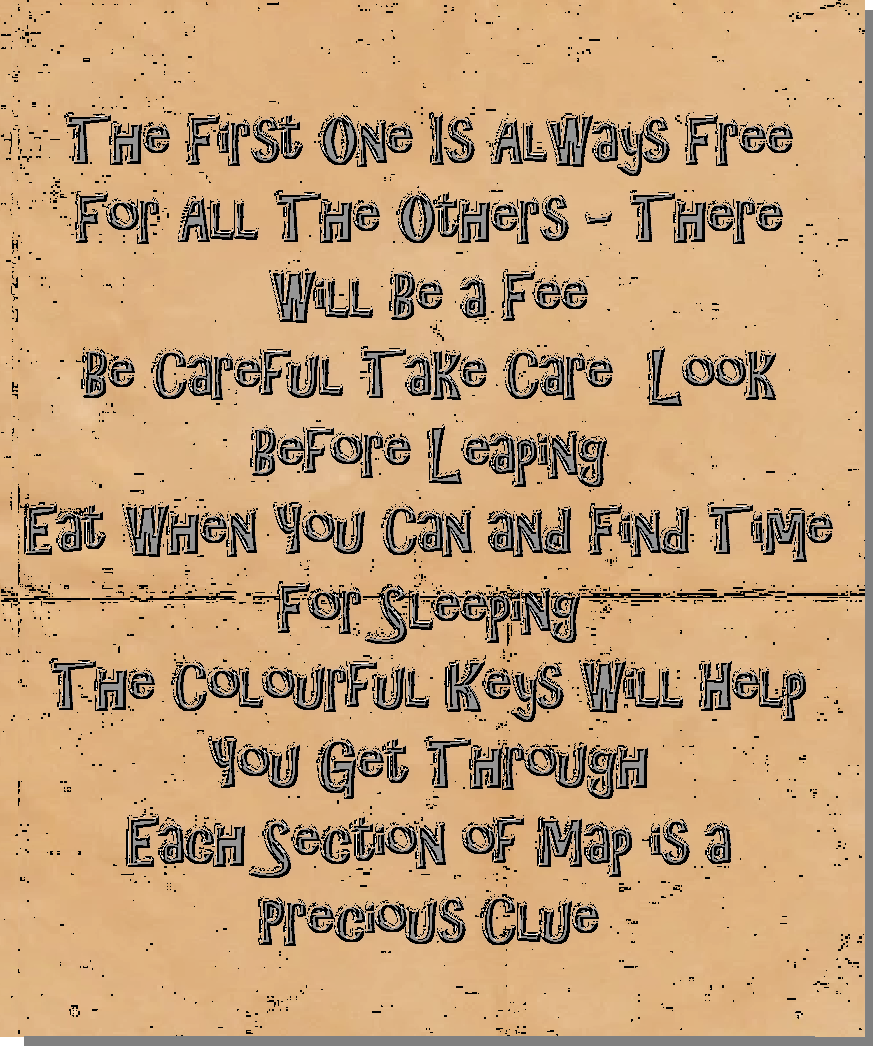 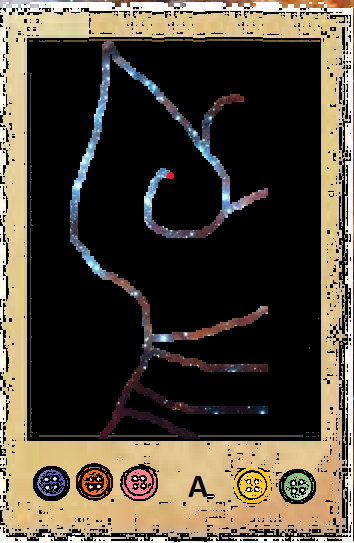 I explain to Callum about The Cave Maps.

Manu Iti: The red dot on the map shows where you presently are Callum. Each map section takes a full day to navigate, all going well.

I then explain to Callum about what "The First One Is Always Free" in the note means.

Manu Iti: Whichever pathways you choose to take, arrangements will be made for payment of 100 Otseng Tokens from The Tanager to Wiremu's forum account, payable in advance before each of the next parts of the map will be handed over to you.

This is both a gesture to acknowledge the time and effort Wiremu has put into the artwork as well as providing an interesting opportunity in which to invest the Tokens.

As well as that, the gesture allows essential Disc items to be placed into the Play for you to find. 1 Cave Disc for every 100 Otseng Tokens spent.
Top
Locked
43 posts